This was how we spent our afternoon in Vigan.

Syquia Mansion
From Villa Angela, Steve drove us a few meters down the road to Syquia Mansion. Although sometimes referred to as the home of the Quirinos, the house actually belongs to the family of Alicia Syquia Quirino, the wife of President Elpidio Quirino. Ferdinand served as our guide as we explored the mansion that stood the test of time since 1830.

Upon entering the house, we saw a black carriage owned by family. Then we were led to the stairs leading to the main area on the second floor. Our guide pointed to us a circle on the floor which served as a peep hole to screen the visitors the family would like to receive in their home. There was also another peep hole on the wall of the master bedroom. 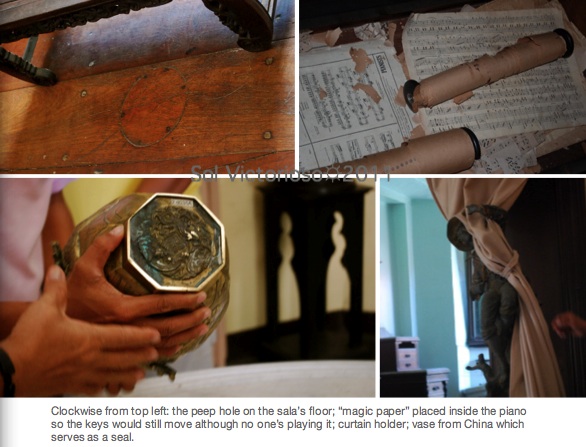 The tour started in the sala. On the round table was a vase from China with a base which also served as a seal.  The house was spacious with its high ceiling and big windows framed with draperies held back by sculptures. Hanging on the walls are paintings of Juan Luna such as the Spoliarium, The Blood Compact and The King and His People, to name a few. This was done by the great master's student.  Apart from the Luna paintings, portraits of the Syquia ancestors, Vicky Quirino-Delgado (the President's daughter who served as his First Lady and often referred to as the Teenage First Lady) and President Elpidio Quirino were on display. 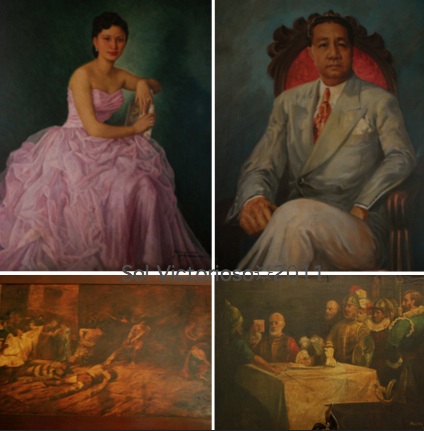 Just like any typical home of the past, the Syquia family has a piano. But what made it different was that Ferdinand showed us rolls of paper with holes in it. This was usually inserted in the piano so that the black and white keys would move although no one was playing the instrument. Just like in the horror films. So now we know the secret to such cinematic effect.

The house is also home to numerous beautiful wooden furniture with intricate details. In fact, most of it were done by Atay who incorporated his insignia (pumpkin carving, either half or whole) into his work. 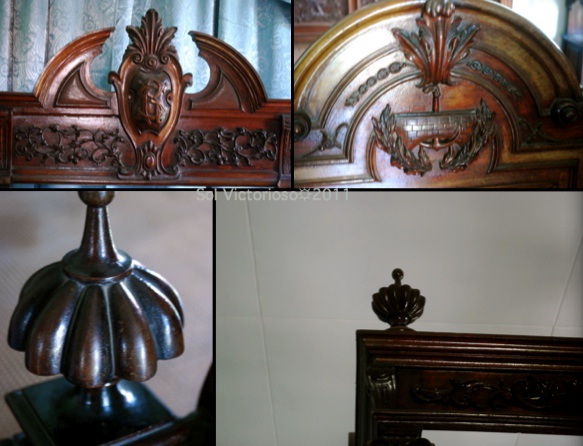 Just outside the bedrooms, next to the windows, is a long alley which served as a passage for the helpers. Back then, they were not allowed to just roam anywhere in the house so whenever they were needed by their masters, they used the said alley.

The Syquia Mansion is a big house with so many rooms. Apart from the sala and the bedrooms, it also has a huge dining hall with a long table that can seat fourteen persons. Above the table are two huge rectangular fans with trimmings pulled by a string to provide cool air to the diners and ward off unsightly winged creatures during mealtime. The walls in this hall are lined with cabinets filled with china, silver and other dinnerware. On one side of the hall is a mini-gong/big bell which is used to announce mealtime or call the attention of the helpers.

The mansion also has a chapel which has been closed to the visitors after the ivory head of one of the images was stolen. It also has a library but it can only be accessed from the boys' bedroom. Hmmm... truly this house was built at a time when only men can attend school.

The mansion's kitchen tried to retain that look which has seen so many years of concocting dishes. On the other hand, the old lavatory is still being used in the T&B. From the kitchen, one can see the azotea. Plus, there are other dining tables close to the azotea for some al fresco dining. 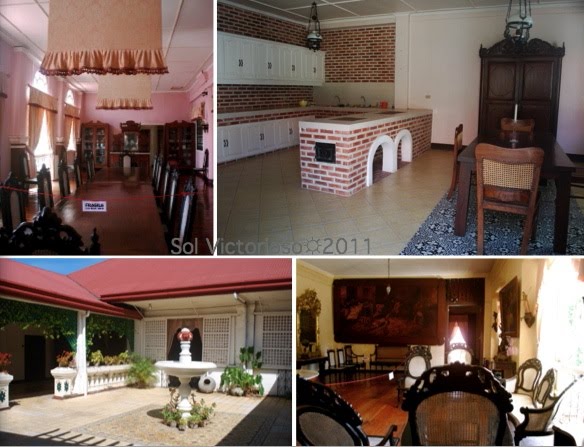 After touring the main house, we went downstairs to get a glimpse of the president's Chrysler, a Crown Imperial limousine. 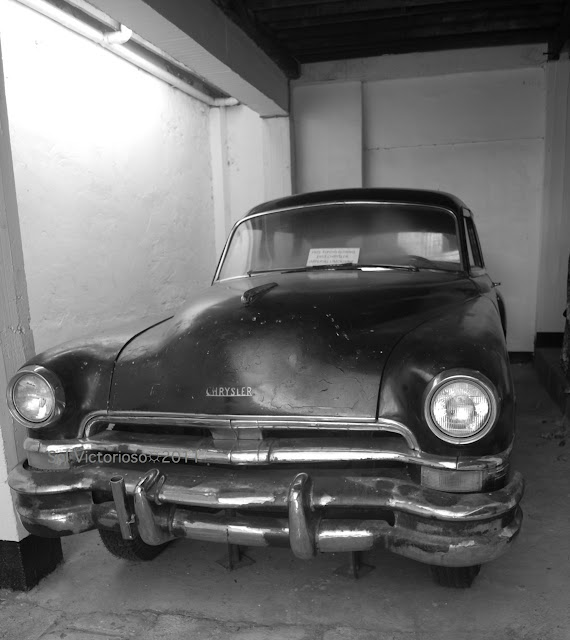 Crisologo Museum
Our next stop was the Crisologo Museum. For the present generation, the Crisologo that comes to mind is Representative Vincent "Bingbong" Crisologo of Quezon City whose life was made into film. But his father Floro Crisologo is alien to most. On my part, all I knew of the elder Crisologo was that he was shot while inside the church, a piece of info I read in a book when I was a kid. So this tour somehow gave us a chance to know the father of Bingbong, an achiever, a fighter and the man responsible for drafting the bill that created the Social Security System.

The Crisologo house is not as grand or as immaculately clean as the Syquia mansion. More of like an organized clutter which I imagined the house to be when the Crisologos were still active in politics.

What to see inside the Crisologo house? There's the library, the outfit that Floro Crisologo wore on the day he was assassinated, the family's carriages and car, the law office which still has his work desk and all his certificates plus his campaign paraphernalia, a long dining table, a wooden refrigerator, shelves of shoes, collection of hats, an almario (pillow rack), a wooden weaving loom, an old piano, the sala, the bedrooms, and the family wall of fame. Of all the Crisologo children, only Bingbong was born in this house.

Burgos Museum
The museum was once the birthplace and home of Father Jose Apolonio Burgos, a member of the triumvirate executed to death as they were implicated in the Cavite Mutiny of 1872.

In the 20th century, the house served as a Post Office and later on a branch of the Philippine National Bank, hence the teller windows on the ground floor. 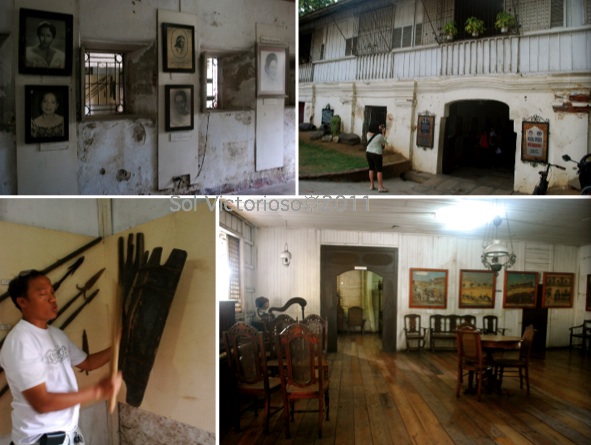 Currently, the museum has an exhibition of the Iloko-Kankanay-Itneg culture and a wall of fame of Ilocanos who have made great contributions to the society at the ground floor. Moving upstairs, one can find memorabilia of the Burgos family as well as paintings depicting the Basi Revolt.

Burnayan
After being clean for the past couple of hours, we were ready to get ourself dirty.  Ilocos is famous for its pottery. A man at the burnayan showed us how to make a vase out of clay using the traditional method --- a kick on the potter's wheel, shaping the mound of clay into a pot or vase and firing/cooking the same inside a kiln. 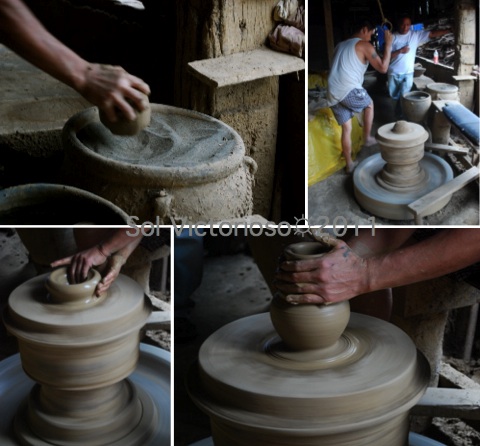 And we weren't mere spectators because we had a chance to shape a vase out of the mound. It wasn't perfect compared to the works of the master potters but it was good enough for beginners. And while we were in the burnayan, I had a sudden flash back of a TV ad back in the '80s wherein the music was "Ako'y Isang Pinoy" and one of its sequences was on pottery making. I also realized how therapeutic pottery can be. 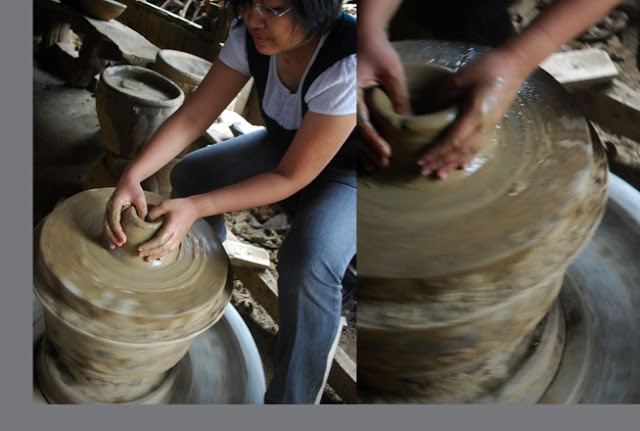 We also went inside the kiln which was huge and of course we got out with soot on our forehead. Our guide also showed us how to make salt using the clay. A considerable amount of water is poured over broken pieces of clay pots or vases and then it's left to dry until residues form which is scraped off. And that now becomes the salt of life. A thousand or more of those clay shards can make one big salt bed.

Hidden Garden
From the heat of the kiln, we welcomed the cool breezes at the Hidden Garden. This place is literally filled with blooms and greens. You follow a maze to the end of the property where you can choose the seedlings you'd want to grow in your backyard. 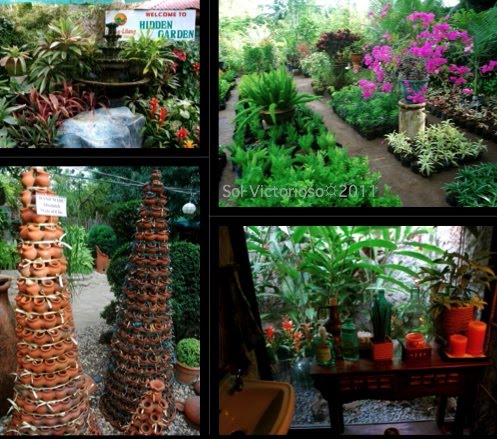 The place has a cafe where you can have a fill of Ilocano delights. And their WC or restroom is also becoming an attraction (Php 5.00 for every use) because it has a view of a pocket garden beyond the glass wall.

Baluarte
Our next stop was Gov. Chavit Singson's huge property which serves as a home to his tigers, ostrich, alpaca, peacocks and mini horses. Humongous, imposing dinosaurs (no, it's not real) and the golden building can be seen from various points in the Baluarte. I also noticed that the railings of some of the buildings featured mahjong tiles. 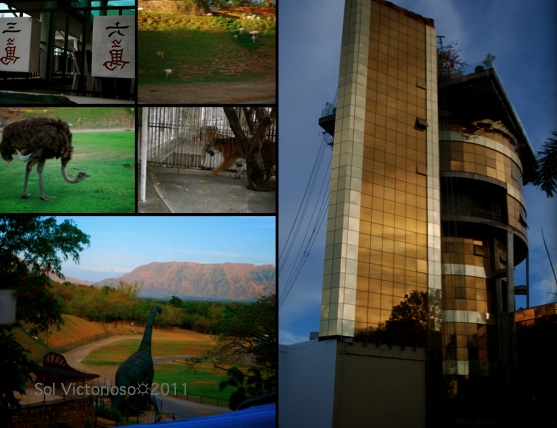 Calle Crisologo
Our last stop was the famed cobblestone street flanked by rows of bahay-na-bato. Walking through the street or taking a calesa ride would stir that feeling of being thrown back to a bygone era. You can't help but think of the Ilocano greats who have surely treaded on this road.

Calle Crisologo is a favorite for postcard-perfect shots. Best times to photograph this street are at dawn, at dusk or when the street is buzzing with activity.

Some of the Spanish houses serve as souvenir shops while the others have been renovated into inns. In the course of our shopping spree, we met a kababayan who married an Ilocana and they now manage a shop along Calle Crisologo. His name is Alex Boctot who hails from Leyte but has made Vigan his home. We bought abel blankets and towels from him.

Villa Angela
This bahay-na-bato built by Gobernadorcillo Agapito Florendo y Bonifacio in 1870 served as our home in Vigan. It is a spacious house with so much room to roam. We booked the Cuarto de las Hijas (which has poster beds, private T&B, A/C and cable TV) and the Cuarto de los Hijos (which also has poster beds, a veranda, A/C, cable TV and T&B next to the veranda).  The house has been featured in Filipino films such as Jose Rizal and Maruja. And of course, their bragging right is having Tom Cruise as their guest while the actor was filming The Fourth of July.  They also utilized the ground floor by converting it into a dormitory room which can accommodate ten persons. 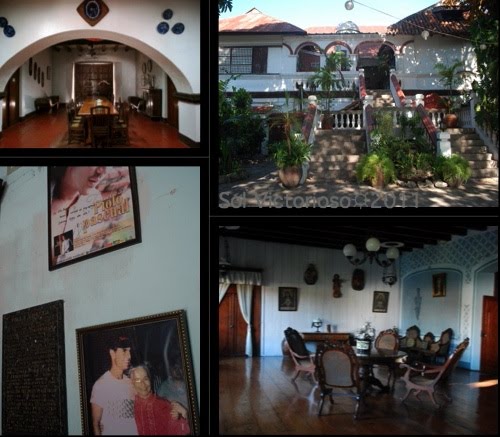 It was definitely a long day but we surely had fun. We were a bit tired but that didn't stop us from looking forward to our next activity that night which is the subject of the next post.

Villa Angela: Php 6,100 (for an overnight stay of 9 pax with breakfast)
26 Quirino Blvd., Vigan, Ilocos Sur
www.villangela.com
Posted by sojournersol at 11:53 AM