On the Road from Laoag to Vigan

We started our day by having an outdoor breakfast at Balay da Blas. I had longanisa, fried rice, egg and tomatoes. My companions had dilis and tapa. The longanisa was a bit bland and had less fat. I had to add KBL (kamatis, bagoong and lasona) to enhance its flavor. 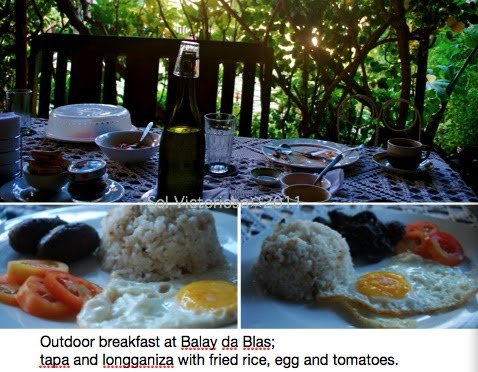 By 8:30 a.m., Steve picked us up and we were on our way to Vigan. Upon leaving Laoag, we passed by the Gilbert Bridge, named after the Governor-General Gilbert. From the bridge, one can see the Hollywood-esque letters of LAOAG on top of a hill. Then we were on our way to our first stop which was Currimao. It was a long ride but Steve had a bag filled with stories so we were never bored. 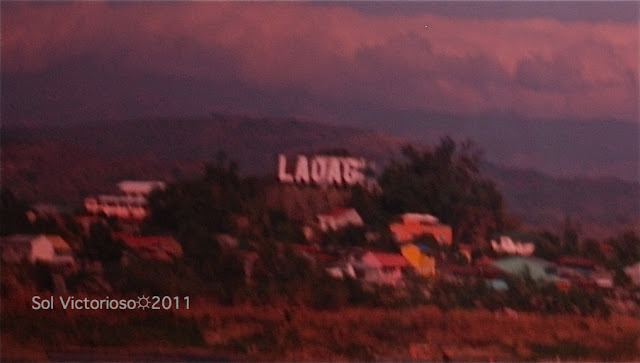 First, he asked us if we knew the song Pamulinawen, its meaning and how it is sung. We knew the melody and that's just it. Steve explained to us the popular Ilocano song. Contrary to popular notion, Pamulinawen is a song which speaks about a father's love for his daughter. And although we usually hear an upbeat version, the song is supposed to be sung according to the rhythm of rowing a boat, slow and steady. Imagine rowing a boat to a faster tempo. Either you'll tilt over or be sore from paddling too fast. 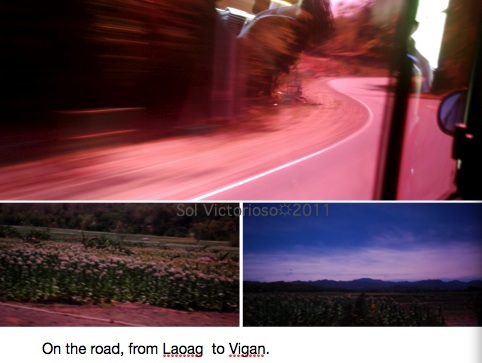 Currimao
We passed by several towns of Ilocos Norte. Finally, we arrived in Currimao. According to our guide, pirates frequented this place. Whenever they saw pirates, the locals gave out a warning by shouting correr cumaw or "run, pirates." Correr means run while the pirates were referred to as cumaws. The place derived its name from the said phrase.

Currimao faces the South China Sea. It is known for tall coral formations which can go as high as twelve feet. If the coral formations were that high, then what is now the highway was also once under water. I asked our guide and he said that the water level could have even reached the hill just next to the shore. 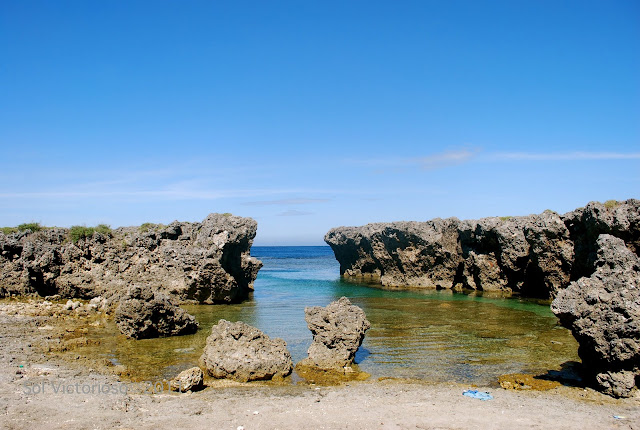 Another interesting trivia, the place was once the location for Playboy magazine photo shoots.  It must have been a pain to pose under the scorching heat and treading on those pointy corals. We also had our own shoot, the wholesome kind though.

Badoc
Our next stop was the town of Badoc. The place got its name from the plant badoc. One local was holding a badoc and when a Spaniard asked for the name of the place, the local thought he was asking for the plant's name. And so that was how Badoc got its name.

This town is home to the master painter Juan Luna. The Luna house which was then in ruins was restored through the efforts of Imelda R. Marcos who (I never knew till my visit to Badoc) was a direct descendant of the Luna brothers. Before we entered the house, Steve gave us an assignment. I saw it as a test not for us but for the museum guides, if they really knew their piece.

The red brick house showcased blown-up copies of Juan Luna's masterpieces which can be found everywhere inside the house and on the walls in their garden. In the painting The Blood Compact, the guide told us that Rizal modeled for Sikatuna while a Pardo de Tavera was the inspiration for Miguel Lopez de Legazpi. The rayadillo of Antonio Luna is encased in a glass display.

The museum guide showed to us the Luna family tree and shared with us what I'd call a tragedy. Juan Luna married a Pardo de Tavera. In their marriage, Luna had a fit of jealousy which led to the death of his wife and his mother-in-law. The Pardo de Taveras could have held the most number of Luna paintings but that isn't the case especially with the tragedy that has happened in the family.

From the Luna House, we proceeded to the Badoc Church or the St. John the Baptist Church where Juan Luna was baptized. But this church has another story to tell. Enshrined in this baroque church is the La Virgen Milagrosa de Badoc. In 1620, fishermen from Badoc and the neighboring town of Sinait discovered a wooden box in Lugo which contained the image of the Blessed lady, the Santo Cristo Milagroso, two statuettes of angels and a violin. It is believed that the box came from Japan where persecution of Christians was happening at that time. The visita of Badoc took care of the image of the Blessed Virgin and the angels while the crucified Christ and the violin were entrusted to the mission of Sinait. 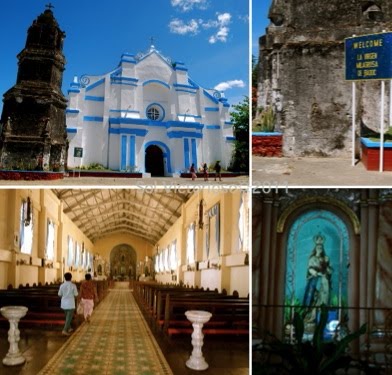 According to our guide, it would take several men to lift the image of the Blessed Virgin. Only those who are pure of heart can lift it by their lonesome. And there is that one man, though I haven't seen him, who can lift the said image all by himself.

Pinili and Magsingal
We continued on with our journey. We passed by the town of Pinili. I came to know of this town because one of my favorite radio anchors of DZRH, Deo Macalma, hails from this place and he'd usually mention it in his spiels. The town is said to be the chosen one because it was in this place where Gregorio Aglipay sought refuge. No wonder, there are a lot of Aglipayans from this town. Another info, garlic is the main product of this town. Bundles of garlic at very low prices can be had in this place.

Another town which caught our attention is Magsingal. Don't be fooled by a grand building which can pass up for a municipal hall. It's no town hall; it's the public market of Magsingal. 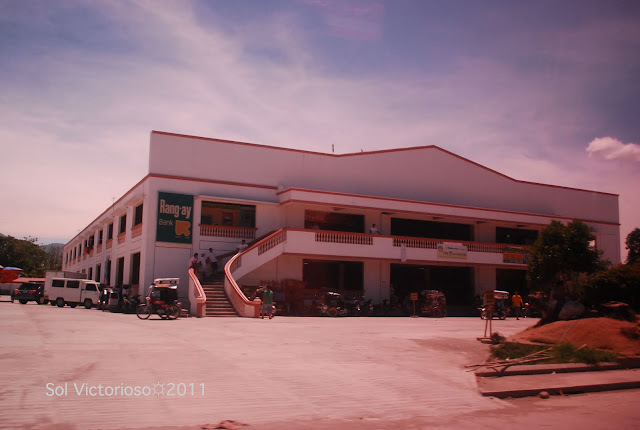 The public market of Magsingal

Bantay
Finally, before noon, we were almost in Vigan. But we had to make a detour to Bantay to take a photo of the famous belfry. Bantay was once a barangay of Vigan.

We climbed up the belfry which had a view of the Cordillera mountain range and Vigan. There was one humongous bell used during ordinary masses and several other bells used on other occasion. Our guide showed us how to ring the bell during an ordinary mass, a wedding, a funeral and emergency. Being up there in the belfry reminded me of Quasimodo and Kampanerang Kuba. 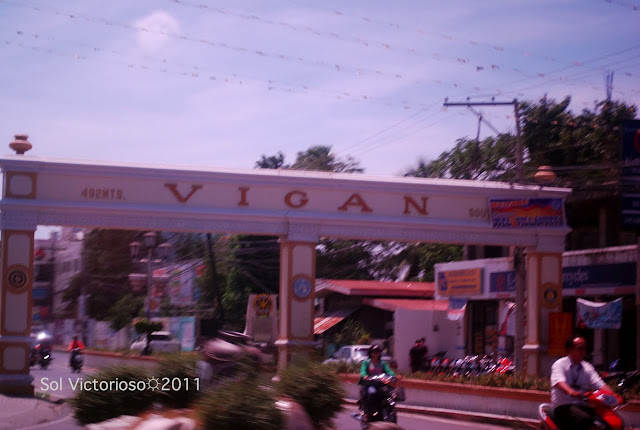 From Bantay, we proceeded to Kusina Felecitas in Vigan for our lunch. The restaurant has brick walls decked with paintings for sale. We ordered our lunch and since it took twenty minutes to prepare, we lounged around and at the same time checked out the Grandpa's Inn which is also in the same building. This place has lots of stuff which dates to eons ago. 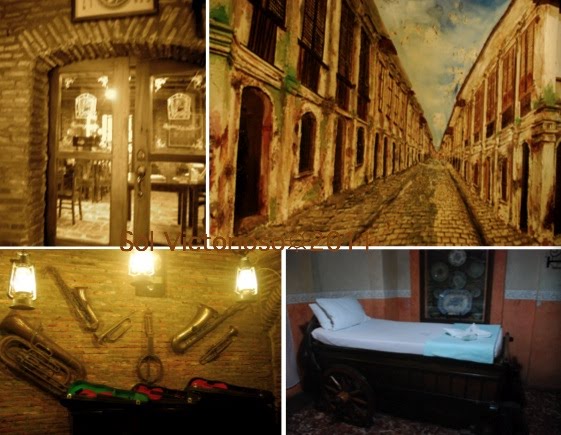 After doing the usual photo ops, we went back to the restaurant just in time for our lunch to be served. We had pinakbet with bagnet, warek-warek or dinakdakan (more of like inihaw entrails of the pig), poque-poque (eggplant dish), adobong saluyot, bagnet (it wasn't deep fried to the nth level, it tasted like lechon kawali), KBL (kamatis, bagoong and lasona) and the biggest surprise of all, the crispy dinuguan. You might wonder why I made that remark. We were expecting the fried version of dinuguan. Instead we were served with chicharon paired with a small bowl of dinuguan (the stew version). Our guide was totally dismayed and apologetic because he knew that was not how a crispy dinuguan was prepared. Oh and yes, he also commented that the bagnet didn't come close to the authentic bagnet. Despite the culinary misadventure, it was a hearty and reasonably priced lunch (we even had left-overs). And there will always be something that would give us a good laugh whenever we would think of our lunch in Vigan.

After our lunch, we proceeded to Villa Angela to check in our rooms and freshen up. I'll talk more of Villa Angela in a future post.