Disney on Ice on Christmas Day 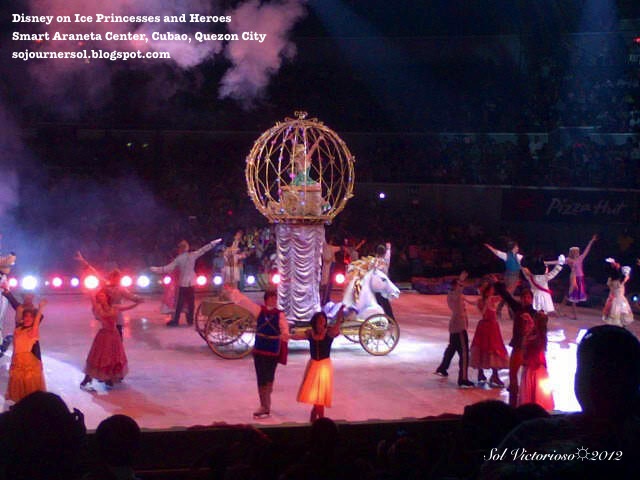 After attending mass, the family spent the afternoon watching Disney characters glide on the ice-laden Smart Araneta Center. Thanks to Riza and Annie Pinpinio, we got to watch the first of the many shows of Disney on Ice Presents Princesses and Heroes this holiday season. Plus Mommy has long wanted to watch this show.

It kicked off with Mickey and Minnie welcoming the audience and reminiscing Disney stories of our childhood. Tinker Bell ushered each story in the show with the wave of her wand alternating with Goofy in the second act.

For tots who are exposed to Disney Channel and Disney films, they'll be delighted to see their daily companions come to life. The young once will definitely get a kick out of reliving childhood memories and singing along to popular hits from the Disney films. And if you love watching figure skating (although the performance is not of Olympic standards), then it's a bonus.

We saw Princess Jasmine, Aladdin and the Genie in the marketplace. Snow White was in the forest with the Prince while the Seven Dwarves did their famous Hi-Hos. And then of course there was Belle and Aurora who was awaken from her deep slumber by Prince Philip who fought the fiery dragon.

What's Disney without Cinderella and her stepsisters and the iconic carriage? Or how about Rapunzel and her very long tresses? But there was one Disney princess that I was not familiar with. I thought she was Pocahontas but then she was not singing any of the songs from the film. Until at the end of the show, someone pointed out that she's a character from The Princess and The Frog. And that's when I learned that she was Princess Tiana. Pardon me but I never got to watch the above-mentioned film.

But the princess that got the huge share of the cake was Ariel of The Little Mermaid. Their production number in the first act spilled on to the second act with most of the characters present which include King Triton, the King's daughters, Prince Eric, Sebastian, Flounder and Ursula. And four little girls were so lucky as they were made part of the colorful, bubbly and happy production number of the cast in Under The Sea.

The show lasted for two hours but when you're engrossed in the whole production, it becomes a breeze. If you want to spend an afternoon happy and giddy as a child, and if you have kids or nephews and nieces who are Disney fans, then this will be a sure treat of them.
Posted by sojournersol at 11:15 PM