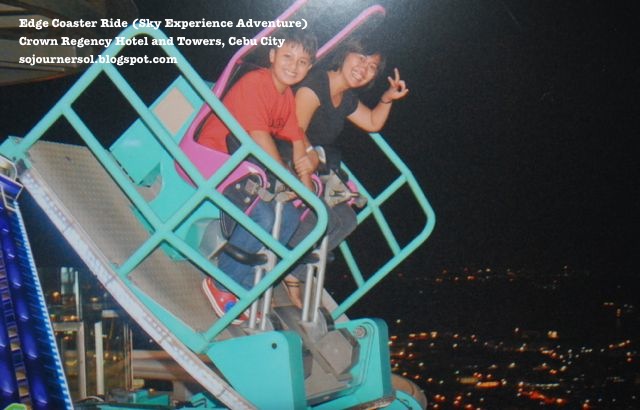 I have been wanting to try the Sky Experience Adventure ever since it opened at the Crown Regency Hotel and Towers in Cebu City. However, none of my Cebu-based friends were too keen to plunge into this kind of adventure while the willing souls were a thousand miles away.

Until I learned that there were eager beavers within my radius. Actually there were two of them but only one was able to join me because the other had classes that week. So after asking the necessary permissions from the father and the cousin who is a close friend of mine, I treated my grade schooler friend JCA and myself to a night of Sky Experience Adventure.

We trooped to the Sky Level. Fortunately, Sinulog was fast approaching and they had special rates. From a little over a thousand for two rides (Edge Coaster and Skywalk Extreme)/pax, it dropped to Php 750.00. And I think this became the going rate from then on.

We had to entertain ourselves first with the 4D movie. While it was something not new to me (and it paled in comparison to the 4D experience in Singapore), my companion definitely had a grand time enjoying this new cinema experience.

At about an hour before midnight, we were already being given an orientation and safety instructions when getting on the Edge Coaster Ride. No cameras allowed and we had to deposit the stuff that we carried to make sure that it doesn't fall off from the building. We didn't wear any special gear. We sat on those twin seats that can be likened to the CineBlast seats or those roller coaster ride seats and were safely strapped. While we were warned that the seats would tilt downwards at a maximum of 55 degrees, what we didn't expect that it would be sudden, just a few seconds after our coaster moved. So imagine the jolt it gave us but we immediately overcame the initial shock and enjoyed the ride and the beautiful view of the city at night at the 38th floor of the building. We had control of the lever and had the option to return the seat to an upright position but we did so only when were almost done with the ride.

Then we proceeded to the Skywalk Extreme. This time, we had to wear those orange and blue suits and harness. We even had to wear a suitable footwear. After the giving of the safety instructions, we were accompanied by our safety guide as we walked down the glass floor that went around the building. We had the usual photo ops to show that we were walking on the edge of the top of the building with a view of the city below. We took our time as we marveled at the bright lights (it was just a few days after New Year's Day) that dotted the metropolis, pointing out to popular landmarks and structures. We also had a bubbly guide who seemed to talk non-stop and who made us feel at ease as we conversed with him at the 37th level (around 126 meters above the street), sitting on the edge of the Skywalk with our legs dangling like it was the most normal thing to do. 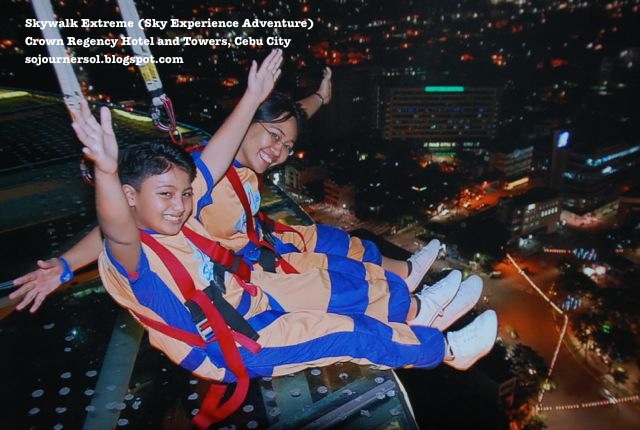 Then it was time for us to leave at the stroke of midnight. In fact, we were the last guests and we literally closed the place as we joined the staff manning the place at the Sky Level descend the building.

So there goes one item ticked off from my list. And it was definitely a night of adrenaline rush and visual feast of the city that my friend and I enjoyed.

Posted by sojournersol at 8:50 PM