As a kid, I remember passing by Santa Ana en route to Mandaluyong, Makati or Taft Avenue, with the old gray church on an elevated portion dominating the place. Santa Ana is one of the older districts in Manila rich in history. It is a gem waiting to be rediscovered, with stories waiting to be heard by the new generation. 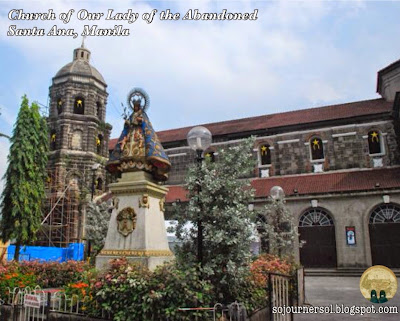 The tour kicked off with a bird's eye view on Santa Ana, presented by Ernest Panis, one of the locals and a staunch advocate on preserving the district's heritage. The presentation would be a helpful tool later in the tour as it gave us a better appreciation of the places we would be visiting.

The Kingdom of Namayan

Long before the Spaniards came, there was once the Kingdom of Namayan ruled by Lakan Tagkan and his wife Buan. Its capital was located on what is the present-day Lamayan area. The kingdom's territory was vast, extending to as far as what we now know as Paco (Dilao), Pandacan, Mandaluyong (San Felipe Neri), Makati, Malate, Sampaloc, Quiapo, San Juan del Monte, Taytay, Maycatmon, Calatondangan, Dongos, Pinacanasan and Yamagtogon.

When the Spaniards came and established a settlement, the Franciscan missionaries named the district after St. Ann, the mother of Mary.

The first church in Santa Ana was built in 1578 out of bamboo and nipa. In September 12, 1720, the cornerstone of the present church was laid on a hill. Prominent structure of the church is the hexagonal belfry which was ruined by the 1880 earthquake but has since then been restored. 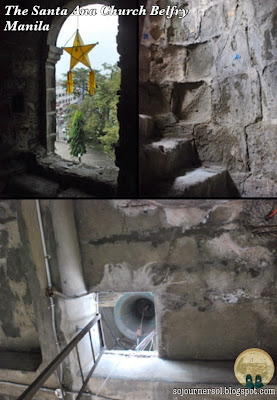 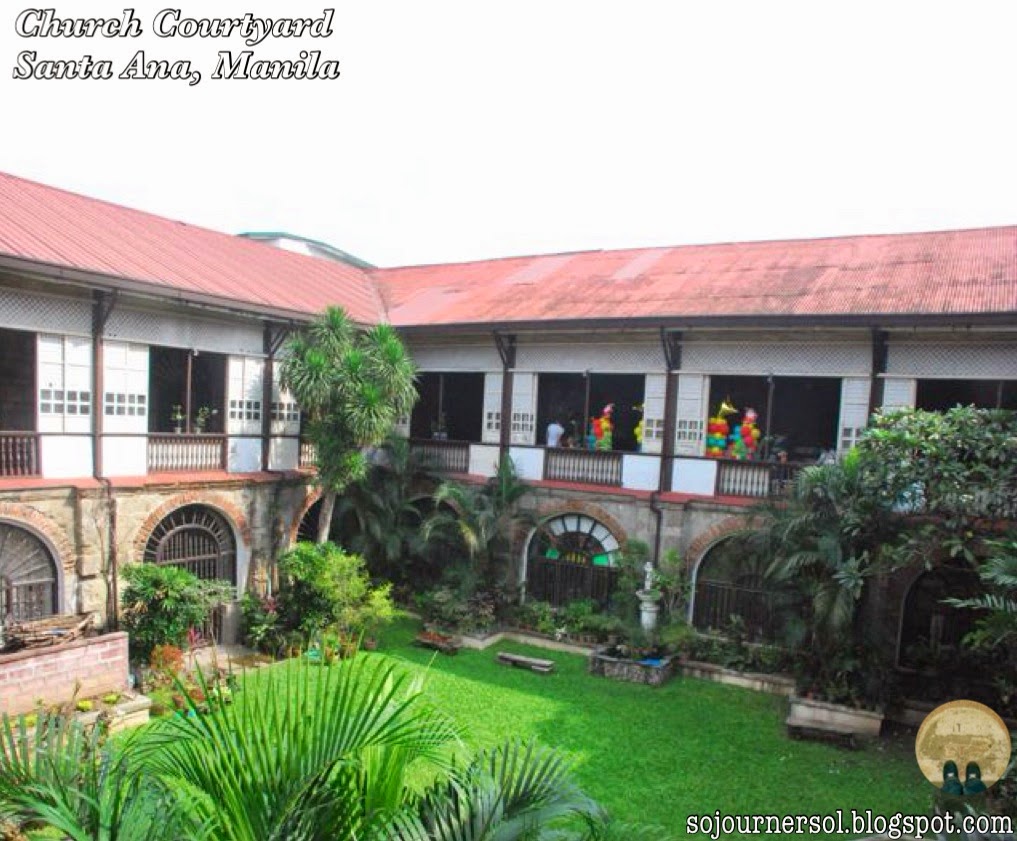 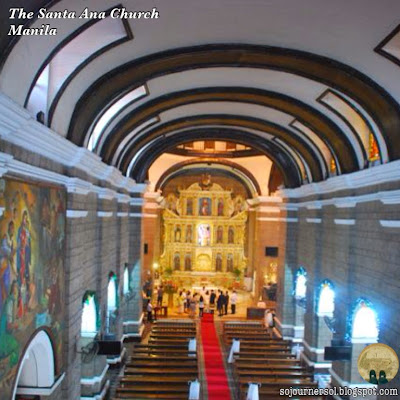 The patroness of the church is Nuestra Señora de los Desamparados or Our Lady of the Abandoned. The image, a replica of the original in Valencia, Spain, was brought to the Philippines by Fr. Vicente Ingles onboard the galleon Sto. Cristo de Burgos. The platform on which the Lady stands is believed to be the very same material taken from the galleon.

One of the beautiful structures inside the church is the churrigueresque-styled retablo. It has twelve niches containing images of saints and two medallions of Franciscan saints on both sides. On the center niche is the image of Our Lady of the Abandoned. 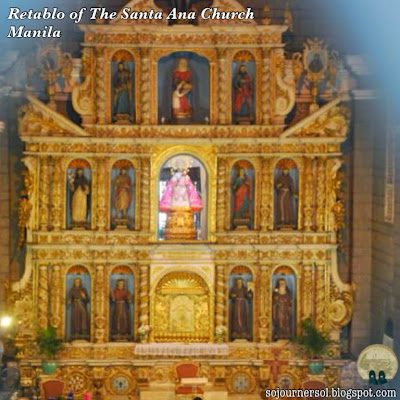 One of the must-visit areas of the church is the Camarin dela Virgen or the Little Dressing Room of the Virgin just behind the retablo. On its ceiling are paintings depicting the life of Christ while its flooring is made of blue-and-white Ming Dynasty porcelain tiles. 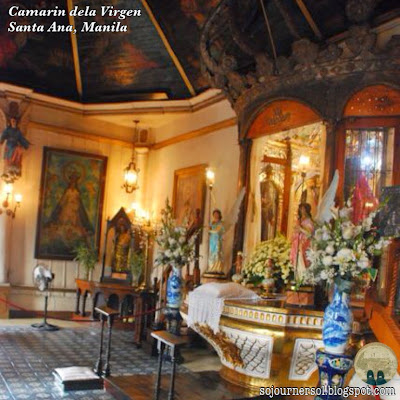 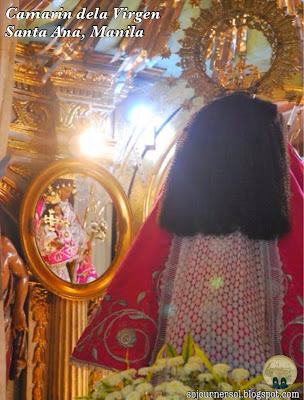 Behind the church is the Virgen del Pozo and the miraculous water coming from the well which existed since the construction of the church. In the 1920s, when typhoid became an epidemic, the sanitary inspectors sealed off the well. 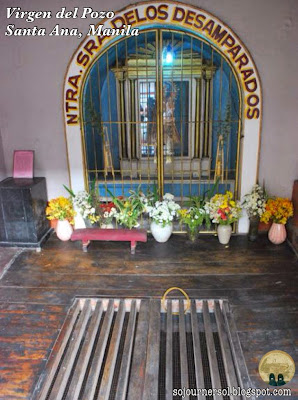 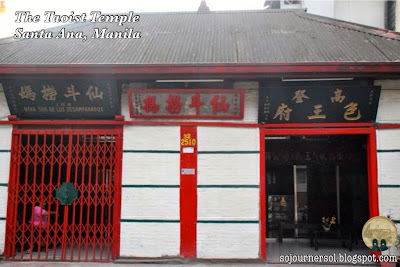 Just across the Virgen del Pozo is a temple built in 1880, dedicated to the Chinese deity Pao Ong Hu. Surprisingly, images of Our Lady of the Abandoned and the Sto. Niño are being venerated in the temple. 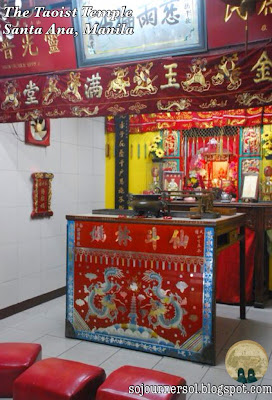 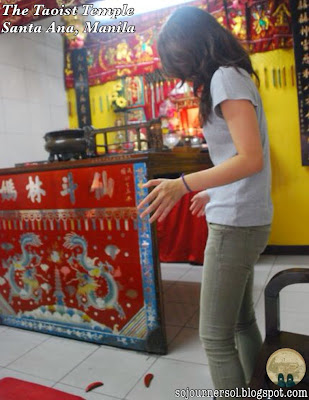 On the middle of Pedro Gil Street, just across the parking entrance of the church, is the Plaza Calderon, named after Santa Ana native Felipe Calderon who drafted the Malolos Constitution. Nearby is Plaza Hugo which is now lined with stalls. 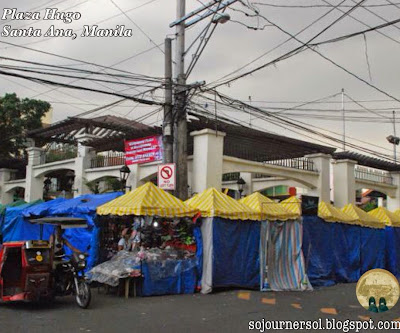 Santa Ana is one of the stations where boats cruising down the Pasig River would make a stop to pick up and drop off passengers. It also serves passengers crossing the river from Punta to Santa Ana public market and back. 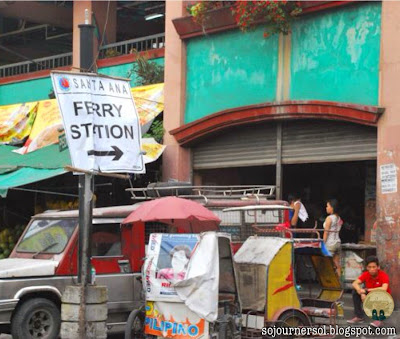 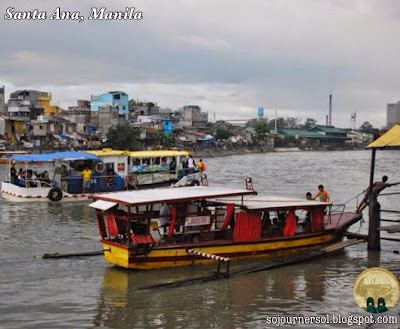 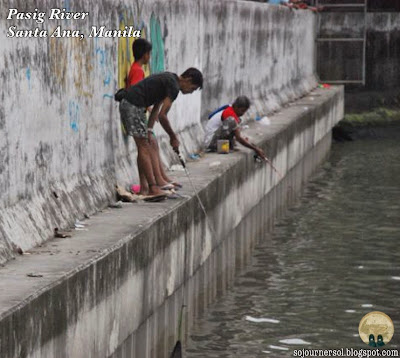 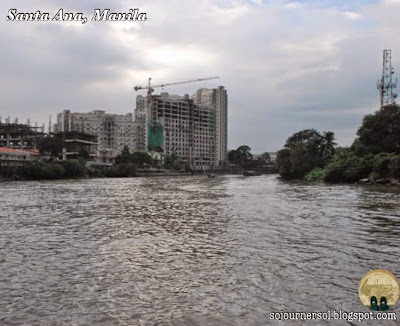 Near the ferry station is the public market where one can have a plate of palabok. We went to Aling Meckie and had a sample of these noodles bathed in orang-y sauce and chicharon (pork cracklings). 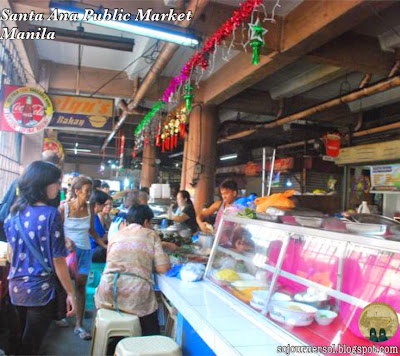 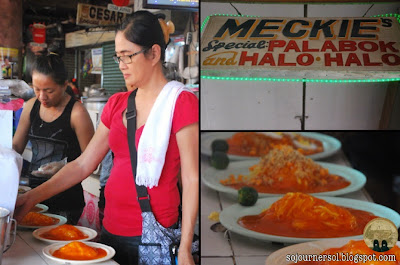 Back in the olden days, Santa Ana was a leisure getaway with stately homes lining the banks of the Pasig River. It was said to be that era's Tagaytay or even Forbes Park. Sadly, only a few of the heritage houses are left which include the Xavier House and the Lichauco House, to name a very few.
We were able to enter one of the remaining heritage houses in Santa Ana - the Santos house which is now maintained by Gabriel Santos. The still liveable house was built by his father Valentin Santos in 1932. 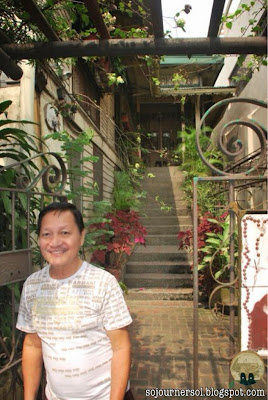 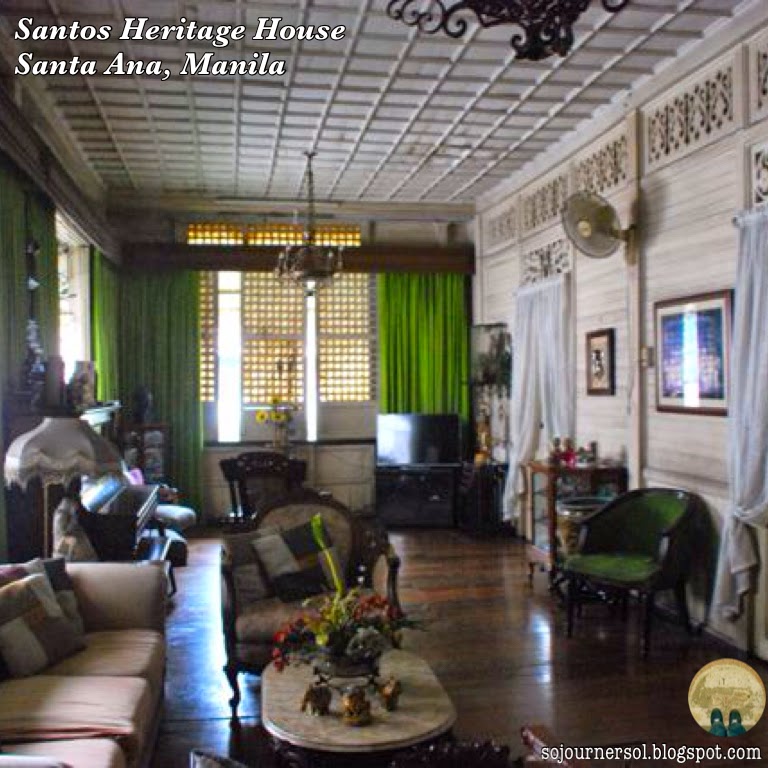 Sadly, other heritage houses gave way to commercial development such as the house of the Columban Fathers which now has Save More on its site and the house of Doña Cornelia Lichauco which is now the site of the establishments Generika, Jollibee and 7-eleven. 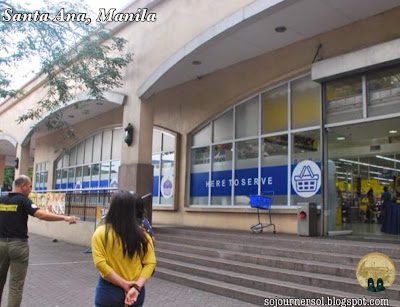 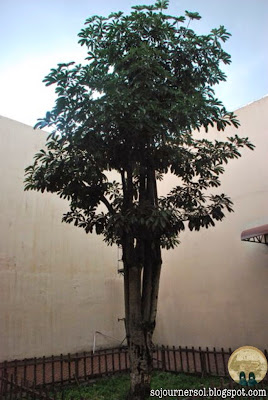 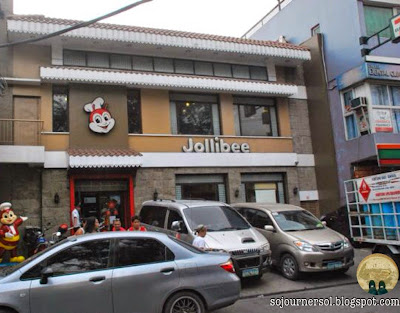 During lunch with our tour guide Boyet Magala, tour coordinator Cheska Lacson of Fundación Santiago and SAHTA President Sylvia Lichauco-de Leon, we had a preview of the documentary "Manila 1945, The Rest of the Story" by Peter Parsons and Lucky Guillermo. At a time when Intramuros was heavily bombarded during World War II, many of the residents fled and sought refuge in Santa Ana. And it was the ringing bells of the Santa Ana Church that was heard as far as Dewey (now Roxas) Boulevard which signalled the Liberation of Manila from the Japanese Imperial Forces. 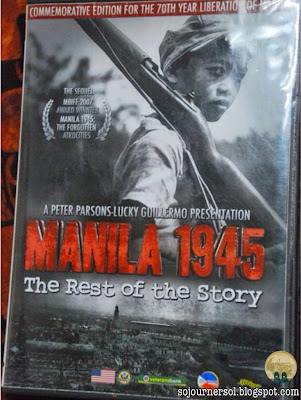 In commemoration of the Batingaw or the Ringing of the Bells of the Santa Ana Church and the 70th year of the Liberation of Manila, the community and the church have lined up activities for this event, which includes the screening of the Manila 1945 documentary.

Other structures in Santa Ana have been declared as national heritage or treasure or have been placed with national markers such as the Church of Our Lady of the Abandoned, Lichauco Heritage House, La Ignaciana Jesuit Retreat House, the Felipe Calderon marker on Plaza Calderon and the Santa Ana Site Museum.

There are two events worth the visit to Santa Ana. 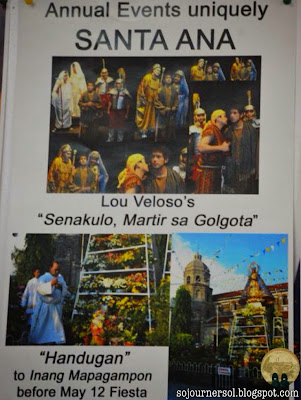 And speaking of Lou Veloso, he is just one of the many popular personalities and celebrities who hail or have spent their time in Santa Ana. 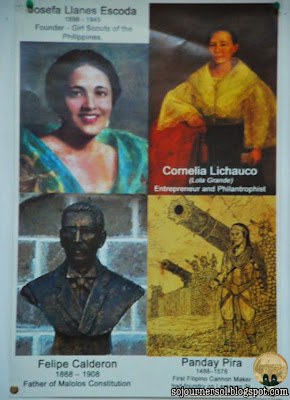 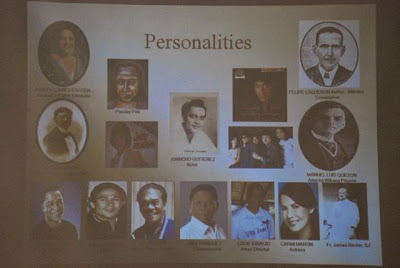 It is high time to rediscover and explore Santa Ana and in the process, help conserve and promote the Santa Ana heritage. For walking tours, you may contact Cheska Lacson (0936-9677660 and email: cheska@fundacionsantiago.com) and Boyet Magala (0933-4613676 and email: boymag.ilibertad@gmail.com).

The Santa Ana Heritage Walking Tour is made possible through the joint efforts of the Santa Ana Heritage Tourism Association (SAHTA), an association of Santa Ana locals involved in community-based heritage tourism and heritage conservation headed by Sylvia Lichauco-de Leon, and the Fundación Santiago (FS), a non-profit organization which helps communities attain economic sustainability through cultural, historical and environmental wealth of a locality such as establishing a heritage walking tour.