Repost: End of October, First of November and a Chaotic, Snowy Evening


It's the time of the year for our kindred ones in the northern hemisphere to experience the changing of colors and seasons, from the golden brown of autumn to the grey and white of winter. I wonder if the first snowfall came (or will come) as predicted or fall from the skies when least expected. I remember four years ago when Stockholm was caught unprepared with the first signs of winter.

I am reposting an entry from my other blog of that experience. 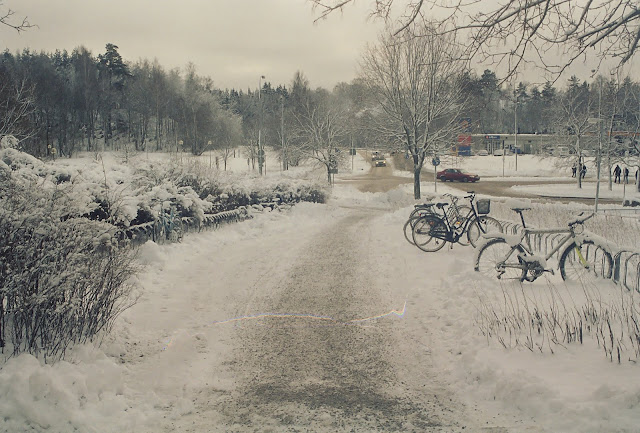 The rains just stopped. I was walking down Odengatan en route to Sveavägen when I was taken aback by what I saw at the corner of the block (where Hard Rock Cafe is). It was a sight common to any place in the Philippines after a heavy downpour.  There was a puddle of water and some pedestrians had to jump over it while the others just waded through it in order to get to the pedestrian lane.  As I was no Elma Muros and I had no intention of getting soaked in the water, I walked to the other end of the block just to cross the street. Little did I know that this was a prelude to a surprise that the Stockholm weather has in store for me.

There was a talk going around that snow would come on the 30th of October.  The day ended but still not a single snowflake. And then they said that it's gonna on be on the 2nd of November. Then, surprise, surprise! On the first day of November, snowflakes fell from the sky. The day started quite well although it was bit  cold. But when dusk came, I never knew that I was going to have some adventure.

I had to change some bulbs in my room so I went to Odenplan. Since I was too lazy to go to the T-Bana station, I opted to walk to the nearest bus stop. The bus was late and there were a number of passengers waiting at the stop. We were all relieved when we saw a pale yellow number 40 sign (yes, the bus has arrived!) coz the wind was blowing the snowflakes right into our faces.

We all boarded the bus and when it made a turn towards the highway, it literally blocked the other cars coz the position of our bus was perpendicular to the street. The driver can't make another turn; otherwise, a car would be hit which would likely result in some sort of domino effect. When I looked out of the window, everything was at a standstill. Cars were not moving, the red traffic light remained. It was like a sight on EDSA during a heavy downpour.

When the traffic light changed to green, the driver proceeded to the highway towards Albano but we were moving on a snail pace because the cars and the buses were stuck in the snow. (The drivers haven't changed their tire cars to winter tires) And when the bus moved forward, it was doing a zigzag motion. Or the bus would slide sideways even if the brakes were on.

ANGELS In the NIGHT...

Our bus driver (who resembled Rhys Ifans---Spike of Notting Hill), some guys on the bus and other male motorists went out to help the other hapless drivers by pushing their cars so it would move again.

Our bus was now moving on a normal speed after the highway was cleared of the cars and buses. However, the bus destination for that night was Odenplan. Passengers bound for Fridhemsplan had to take the Tbana.

After I finished shopping for bulbs, I decided to take the Tbana coz I know it would be hopeless if I took the bus. The trains were jampacked that night and the stations crowded. I took the train bound for Centralen and then changed to another train bound for Morby Centrum

Finally! I got off the train and I saw a familiar face in the crowd --- Alex, a guy from my corridor. He related how he tried to get home for the past hour or so and for the first time the mere mention of UNIVERSITETET by the train voice over was music to his ears. We decided to walk back to Lappis. It was windy that night that I gave up putting back my hood on every time it gets blown by the wind. I almost slipped but I immediately regained my balance and Alex advised me to step on the fresh snow.

It felt so good to step inside the corridor and in my room. It was warm (never mind if the room heater can only go as high as 21 degrees). We learned that the bus trips were cancelled that night. And as expected...the scenario on that chaotic cold evening became the talk of the town for that night and for the next few days. *blooper : I didn't have my gloves on that night coz  when I was on my out, I changed coats and I forgot to take out the gloves from the pocket.
Posted by sojournersol at 11:24 AM