BisDak Meals in the Metro

For many of us born and raised in the south of the Philippines but are braving the urban jungle that is Metro Manila, one of the things that we truly miss back home are the dishes we grew up with, either prepared in the comforts of our homes or served in eateries or pungko-pungko. 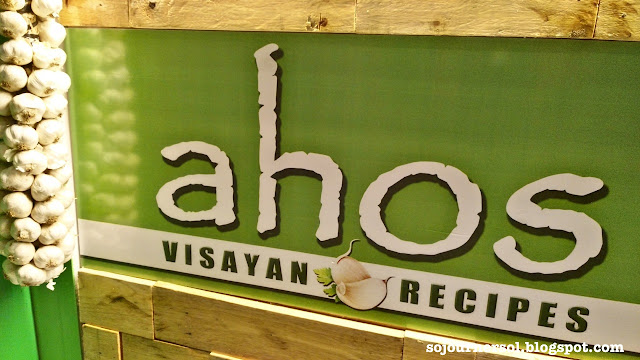 To my delight, there is a dining place in Quezon City, along Sgt. Esguerra Street (just in front of ABS-CBN) that serves well-loved, all-too-familiar Visayan dishes. Tadaa! Presenting AHOS - a restaurant showcasing Visayan recipes.

Ahos in the Visayan language means garlic, one of the basic ingredients found in almost all Filipino dishes. Although in other parts of the Visayas, ahos can also mean spring onion.

The restaurant is relatively new, opening its doors in the last quarter of 2015. Their place is a bit cramped but diners can opt to eat al fresco in a space shared with Backyard Burgers and a Persian restaurant (which escapes me for now).

We ordered KBL (Kadios, Baboy Langka) and Balbacua. KBL, a popular Ilonggo fare, is a stew made of kadios (pigeon pea, also loosely called as black-eyed peas), pork and jackfruit. We also had a bowl of balbacua, that oxtail, feet and skin stew popular among Cebuanos. A piping hot bowl after several rounds of Red Horse beer or dinner shared by family and friends, be it along the sidewalks or in a carinderia - this dish will surely evoke nostalgia in the Cebuanos or those who have made Cebu their home.

Ahos' version of KBL was topped with green peppers. It was fairly good. I was looking for a hint of sourness from the batwan, but sadly there was none. The balbacua, on the other hand, was a tamer version of the ones I had in Cebu. Its broth wasn't as rich as I expected it to be.

There are only a handful of dishes on their menu, mostly Ilonggo and Cebuano dishes. It may not come close to many of your family bestseller recipes but these home-cooked goodness will definitely ebb the nostalgic tide of many BisDaks (Bisayang Daku) in Metro Manila. I hope that in the coming days, they'll have tula (fish in clear soup), ginabot (Visayan version of chicharong bulaklak, kinilaw (ceviche), larang (sour and spicy fish stew) and tuslob buwa (hot dip in a huge wok consisting of pork brains, innards and a variety of seasonings - not for the faint-hearted and the ultra-hygienic). Dishes coming from Leyte and Samar would be great addition, too. 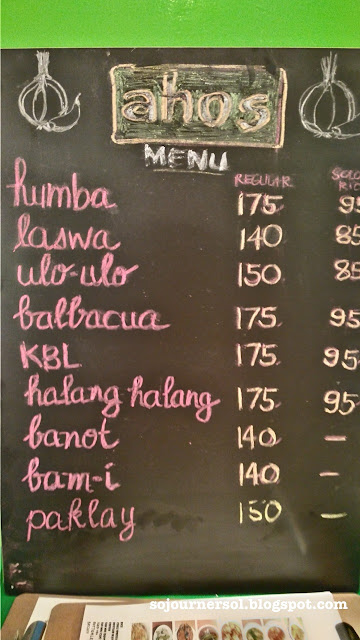