All That Glitters in Bandar Seri Begawan

When friends learned that my family and I were going to Brunei, the common question I got was "Is everything in that country really made of gold?" That I had to find out. So here's how our day went in the country's capital. 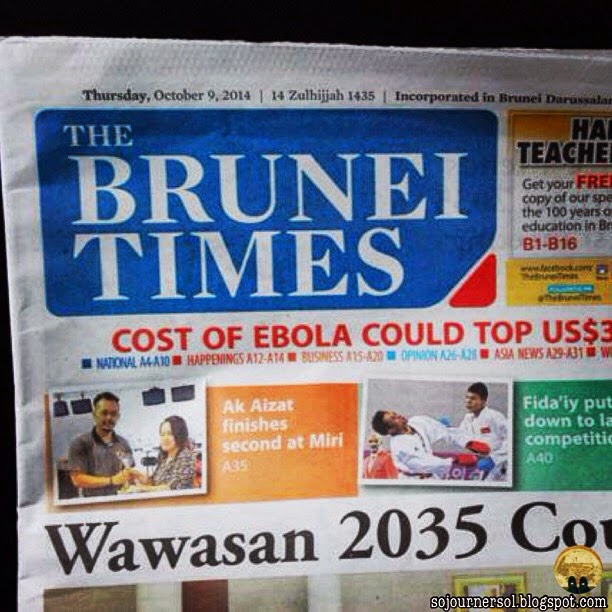 Bandar Seri Begawan (more popularly referred to as BSB or Bandar) is the capital of Brunei Darussalam. According to a local, it means "the town of Begawan." It is small compared to capital and major cities all over the globe.

We started our day exploring BSB by the The Waterfront facing the Kampong Ayer or water village. The place was quiet as it was slowly stirring to life. There were locals offering tours to Kampong Ayer. Water taxis or penambang dotted the Brunei river and would dock by The Waterfront every so often. 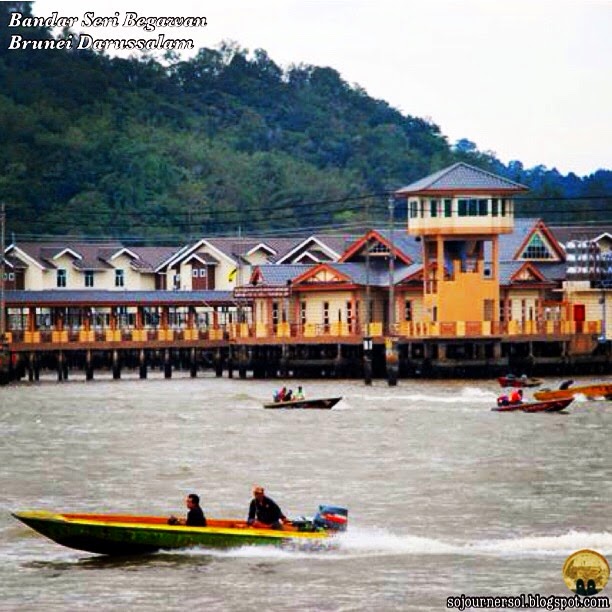 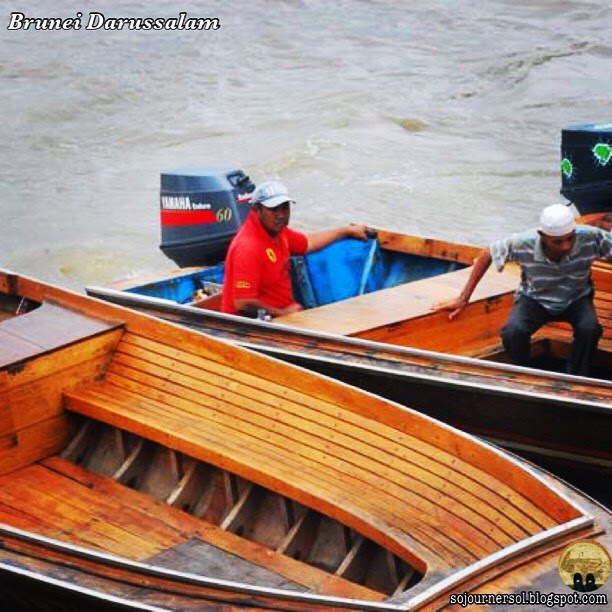 Just near The Waterfront is the Mercu Dihargayu 60, a monument presented by the people of Brunei to the sultan on the occasion of his 60th birthday. I am not sure if this piece of structure is made of gold but it does glisten under the overcast sky. 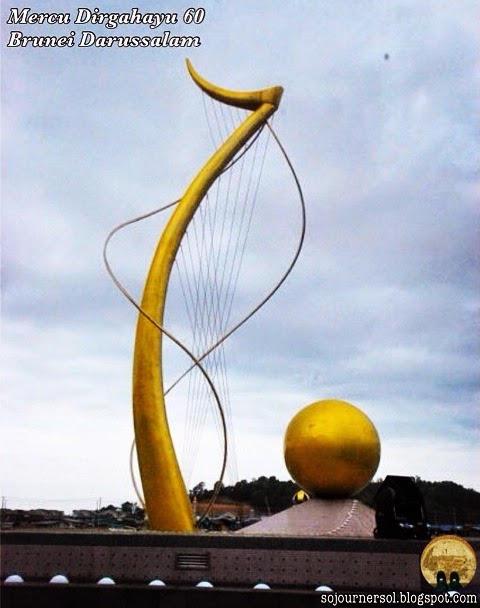 Next, we walked towards Yayasan Haji Hassanal Bolkiah Complex where you can find the Hua Ho Department Store which was still closed at the time we dropped by. From there, one can already have a glimpse of the Masjid Omar Ali Saifuddien. 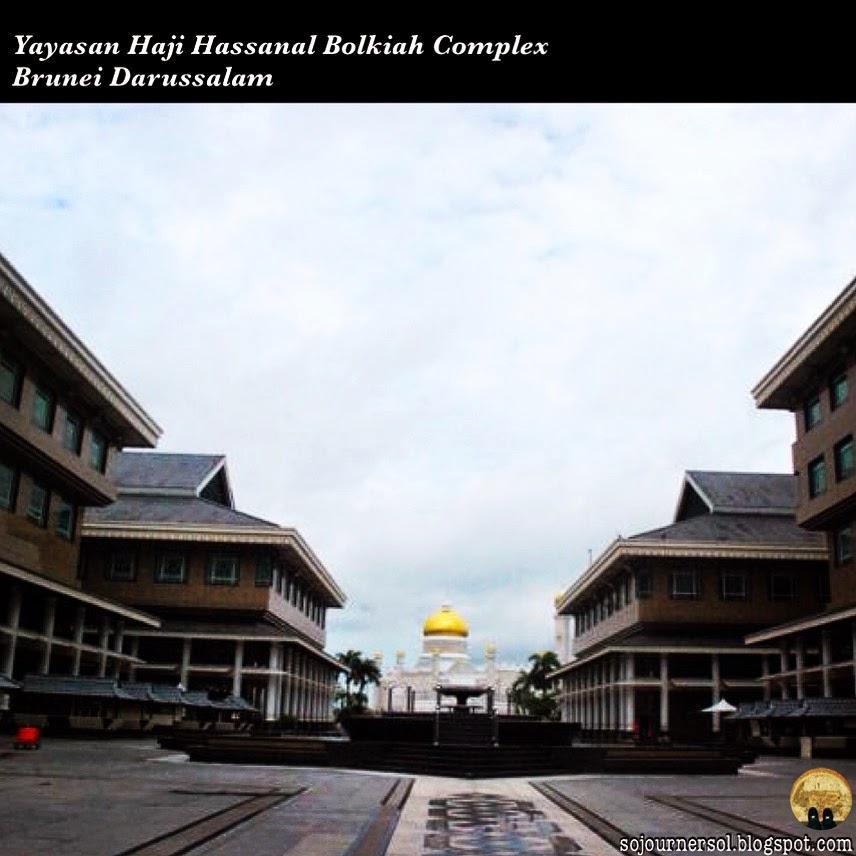 This mosque was built in the 1950s and named after Sultan Omar Ali Saiffudien. Before getting inside the mosque, we had to take off our footwear. Ladies had to wear a long black garb, leaving only the hands and face to be seen. And taking photos isn't allowed inside the mosque. 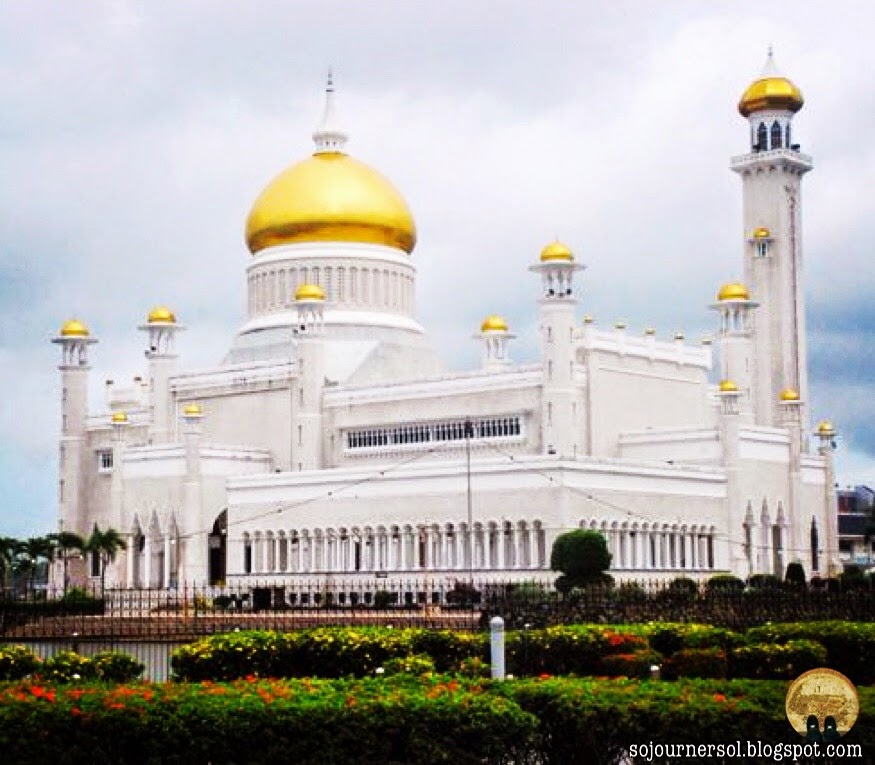 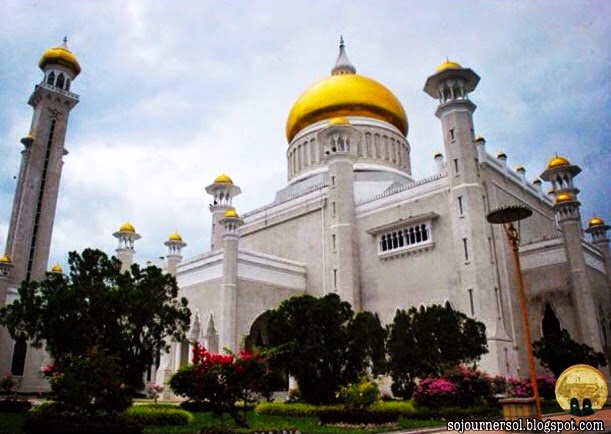 The mosque stands out for its golden dome and marble minaret. Outside, one can take respite in the manicured courtyard or have different glimpses of the mosque from different angles. Nearby is the ceremonial barge. 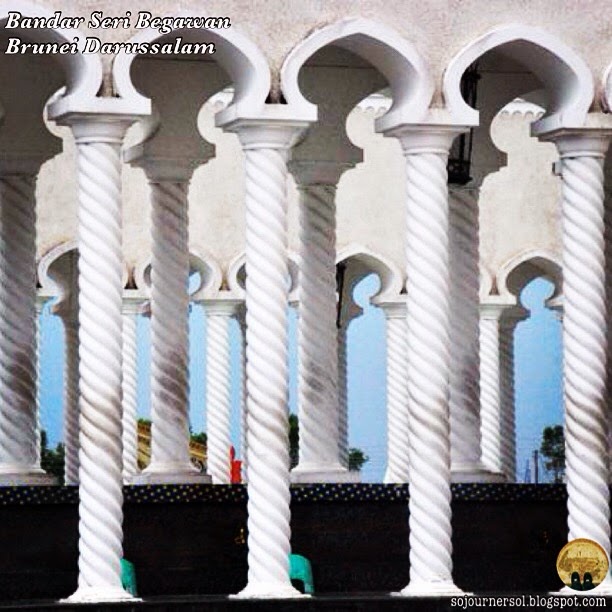 Another place worth visiting is the Royal Regalia Museum which was also a nearby walk from the mosque. Before entering the museum, we had to take off our footwear and get some of those used hotel slippers from the shelves. We had to place all our stuff inside the locker, everything including cameras and phones. Again, taking photos inside the museum isn't allowed. Tour of the museum starts with the history of the sultanate and genealogy of the sultan's family. There are also around two to three floors of memorabilia and presents for the Sultan from different heads of state. And of course, I started looking for a present from the Philippines but to no avail. As I was about to descend to the ground floor, I saw on the wall of the lobby a framed figure that looked like jeepney. I moved closer and indeed it looked like the ubiquitous vehicle in our country. However, I didn't see any marking or note on the wall that it did come from the Philippines. 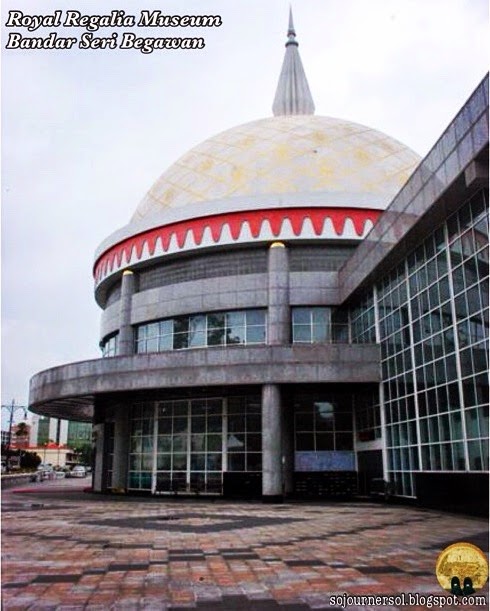 While we were inside the museum, I saw flashes that were likely to come from a camera. And I thought that they had a no-photography policy inside the museum. I later learned from museum staff that one of the sultan's son was in the museum. Official paparazzis fired away in the main lobby as we saw the entourage move towards gallery. I haven't seen any photos of the sultan's son so I couldn't single him out from the group that was gathered below. And when my brother's attention was called for sitting in the lounge (while I was retrieving our stuff from the locker), we were able to confirm that, indeed, we were in the presence of a member of the sultan's family. 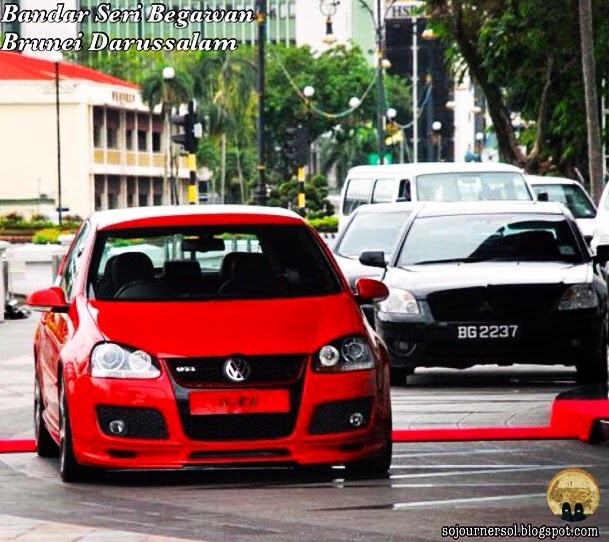 As we stepped out of the museum, I saw this shiny red VW car parked in front of the museum's main door. Probably the ride of the sultan's son.

Just a walking distance from the museum is their Supreme Court and Shariah Courts Building. 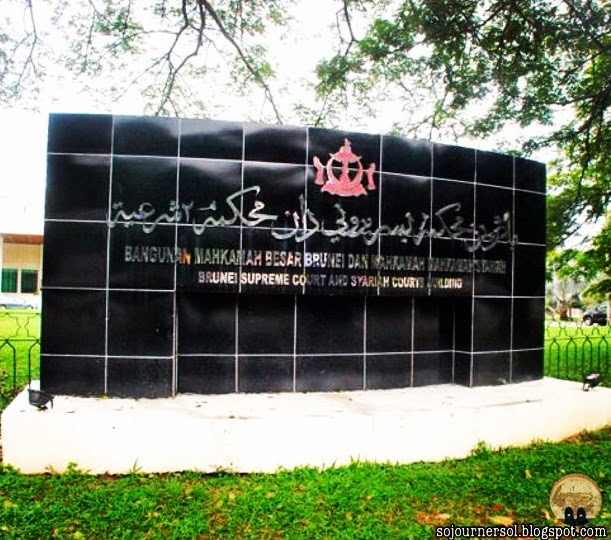 Closer to the hotel where we were staying are two of Brunei's famous edifices, the Istana Nurul Iman and the Jame' Asr Hassanil Bolkiah Mosque.

Istana Nurul Iman, the Palace of the Light of Faith, was designed by National Artist Leandro V. Locsin and was constructed by another Filipino company, the Ayala International. The palace is only open to the public during the three-day celebration of the Hari Raya. 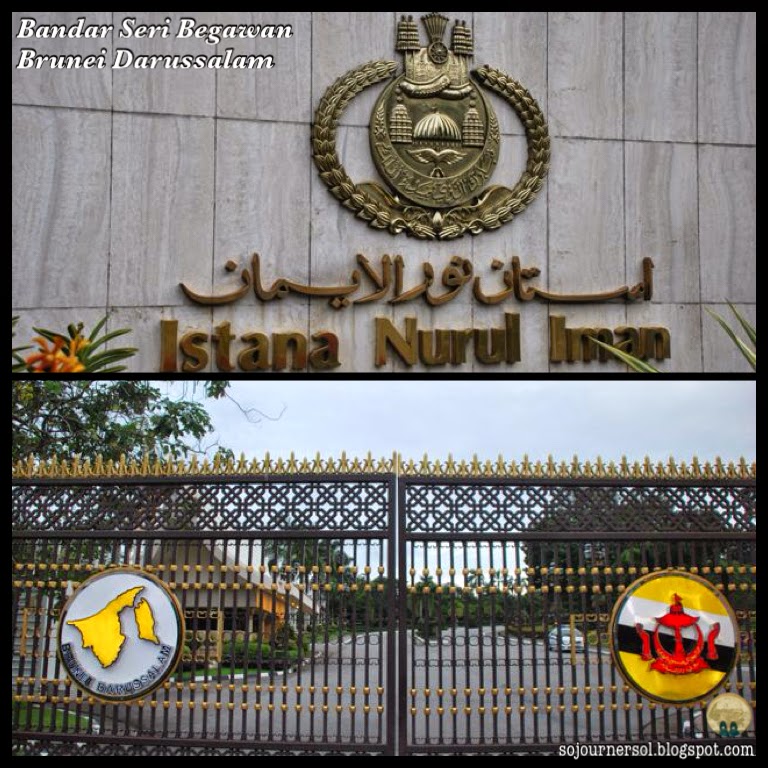 The Jame' Asr Hassanil Bolkiah Mosque, on the other hand, was the first mosque I saw in Brunei. On our way to the hotel from the airport, the mosque was so beautiful in its golden splendour under the midnight sky. We had the chance to go see the mosque again hours later at dusk. 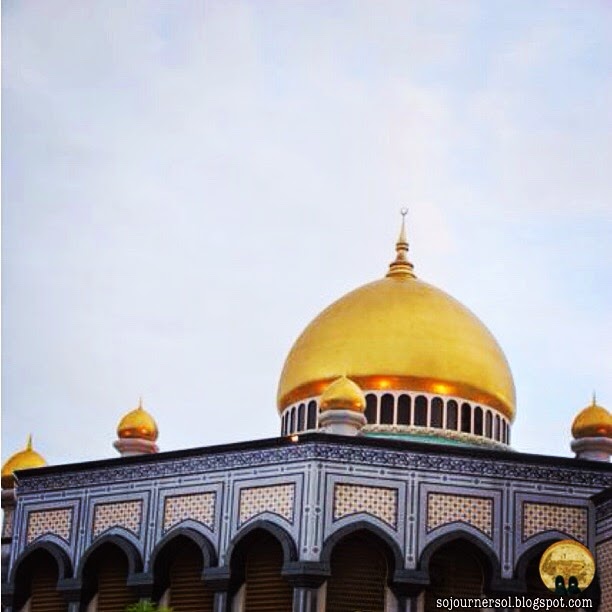 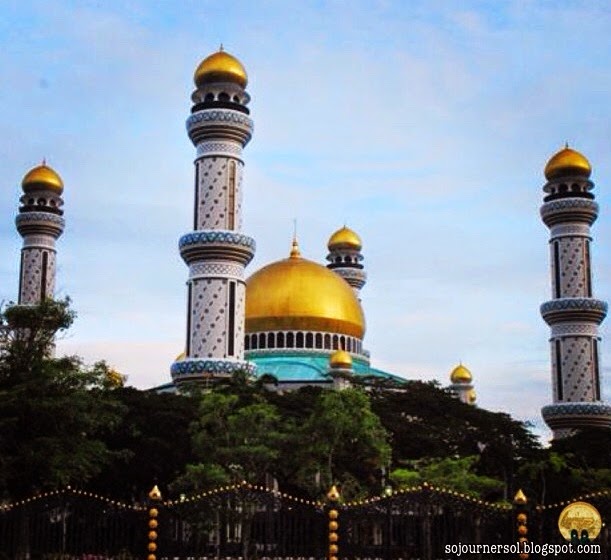 We learned from the staff of the Le Gallery Suites that Bandar can be reached by foot from the hotel. So we tried that route and it took us around fifteen to twenty minutes walk from the hotel to the city centre, passing through a portion of the Kampong Ayer. 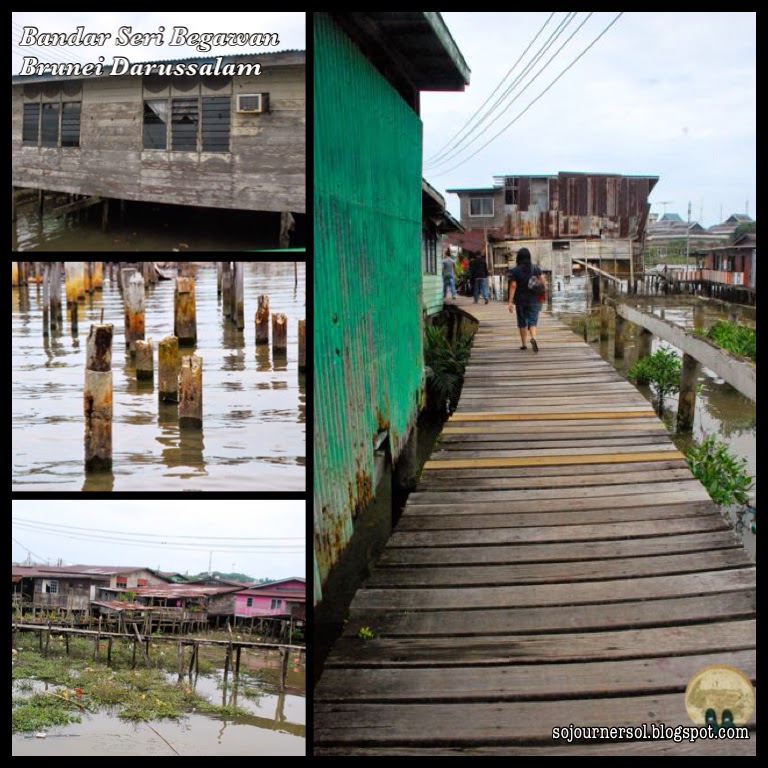 And it was also from this side that we had a different view of the Masjid Omar 'Ali Saifuddien and the Ceremonial Barge. 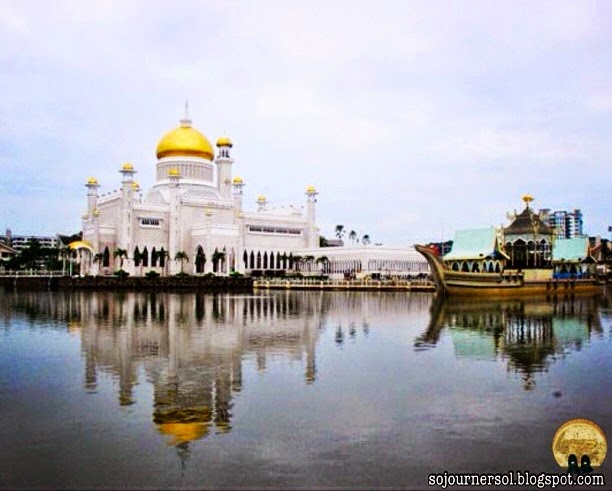 If you love to go to the market to buy fresh produce, then don't miss the Kianggeh Open Market by the Kianggeh River which is a stone's throw away from the bus terminal on Jalan Cator. While at the market, we got to a meet vendor, a fellow Filipino who hails from Zamboanga but has been in Brunei for seventeen years now. She was quite a big help as we tried to navigate around the city center and the rest of BSB. 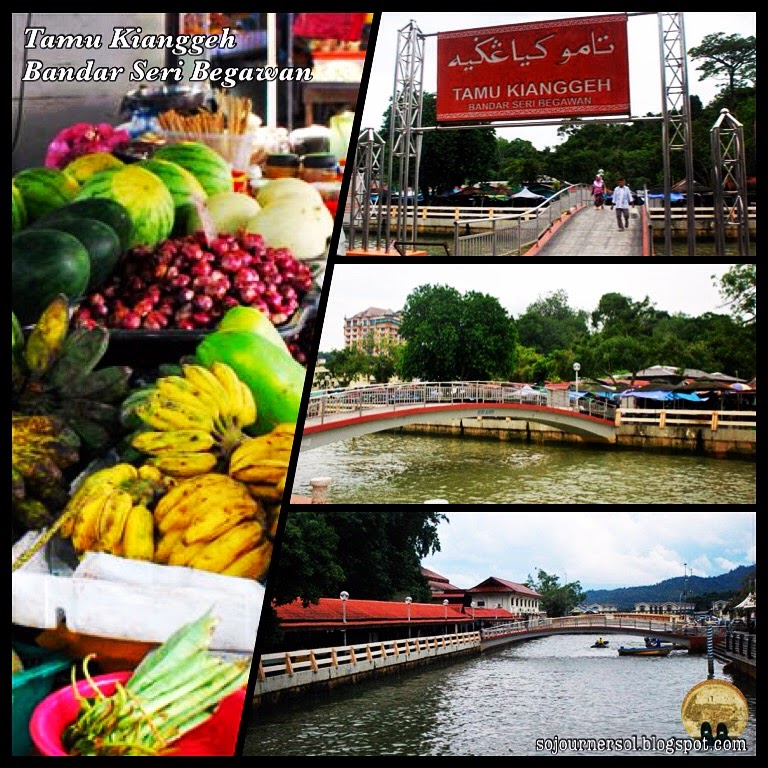 And speaking of navigating around the city, one way to get around is by taking the bus (BND 1 anywhere around the city) which departs from the bus terminal on Jalan Cator. There aren't that much buses compared to the volume that we have in the Philippines. And they only ply the streets until six or seven in the evening. Another mode is by taking the cab which can be expensive. We learned from Mr. Berry Lim (our cab driver when we went to Seria) that there are only around forty registered taxis in the country. And the rest of the population? They drive their own cars. 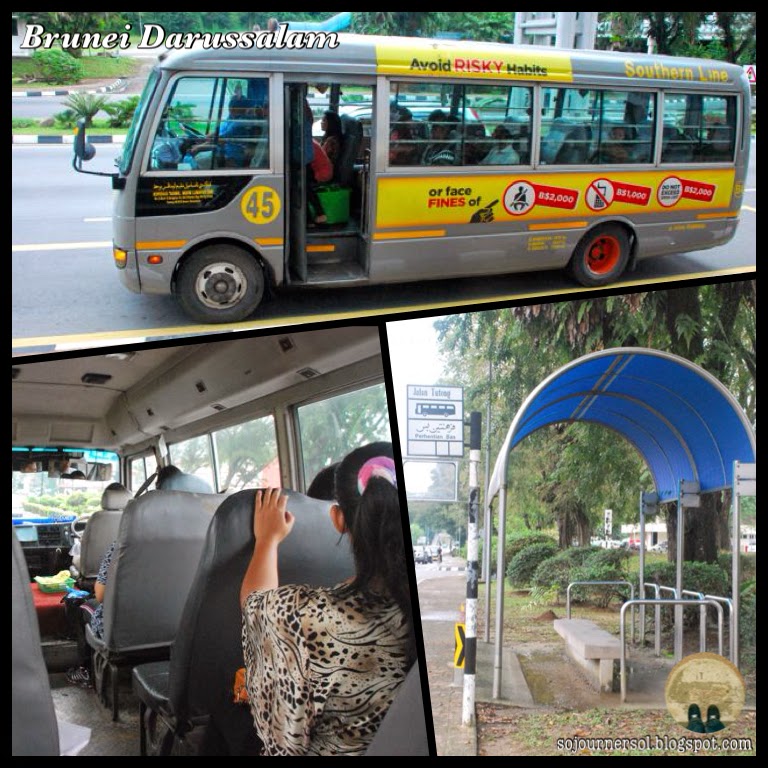 So does everything in BSB glitter? Literally, almost but not quite.  But it is sure worth your day or two to explore BSB.

Posted by sojournersol at 8:58 PM