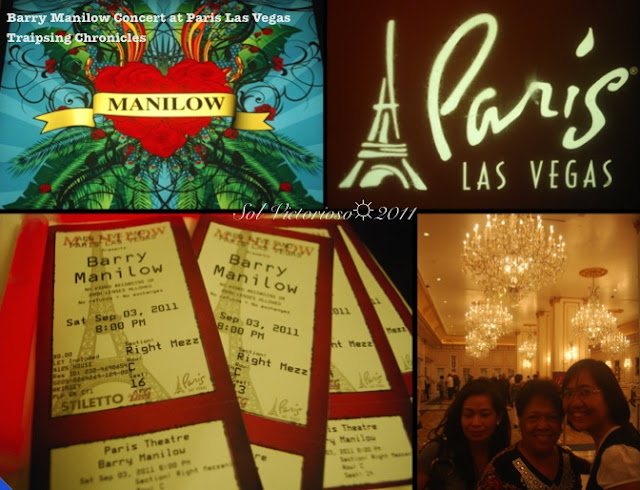 A big thanks to Gerald Gutierrez for treating us to the Barry Manilow concert at the Paris Las Vegas. We spent the whole afternoon hotel-hopping and our friend's house was quite a distance from the concert venue so we never got to change for the night's show. While the rest of the concertgoers were spiffy, we had to make do with our afternoon get-up, kept ourselves neat and sprayed on some perfume so we would somehow at least look presentable.


The place was packed and a majority of those who watched were in their 60's and 70s, definitely big Manilow fans. One lady (in her 60s or 70s) caught my attention. She sat a couple of rows in front of us, and my, did she groove to the music. She raised and waved her hands, danced to the beat and just had one helluva grand time. It was as if I saw a teen or one in her early twenties whose life was filled with Manilow music. She even went to the extent of recording the show but then an usher approached her since filming the concert was not allowed.Those who were seated in the front rows didn't just stayed glued to their seats. They stood next to the stage and swayed to the music. I could just imagine them just like that, thirty to forty years ago, in the many concerts of Mr. Manilow.

I very much enjoyed the show. Barry sounded very much like the records I used to listen to when I was a kid although there's a bit rasp and deepness in his voice. I liked the part of the concert wherein he played a recording of him as a child singing inside a booth. He knew how to pep up his crowd through his music, the band, the dancing and the colorful artsy displays on the big wall screens. But something happened to his face. I think Botox made him look stiff.

We were hungry by the end of the show that we decided to have dinner at the famous In-N-Out. However, the joint was packed so we just decided to drive through. The line was likewise long but we waited and persevered. And it was worth the wait. The burgers had the juiciest patties and their french fries were made from real potatoes. It's like having burgers and fries the slow food way. I heard that an In-n-Out branch opened recently in Singapore and it has caused quite a long line, too. 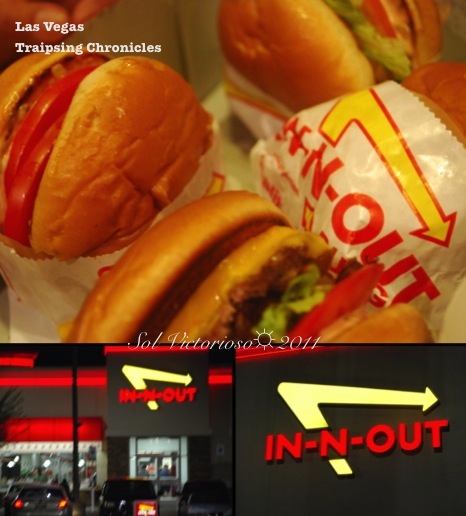 Great music and mouthwatering meal definitely go together. A perfect way to end a good day.

Posted by sojournersol at 12:10 PM