Does anyone know, or has anyone ever heard of this song?

I'm totally clueless about this song until the day we visited the place mentioned in it. But my mom knows the song and has been singing a few lines while we were at Mission San Juan Capistrano which is the subject of this post.


Cliff Swallows
Of all places to fly to during migration, the cliff swallows almost always find themselves in Mission San Juan Capistrano every March 19. They sometimes come as early as February or as late as June but at least there are cliff swallows in sight during the feast of St. Joseph. And because of the large number of avians in flight, fierce competition for survival among the birds is common.


San Juan Capistrano
It is a town in the Orange County in California. But San Juan Capistrano also refers to Giovanni Chiori, the Italian Franciscan from Capistrano, Italy. He lead a group of volunteers in a face off with Sultan Mohamed II and his soldiers who wanted to abolish Christianity. The former succeeded and to commemorate the triumph, church bells are rung and the angelus is said every noon.

Upon reaching San Juan Capistrano, we made a stop at the beautiful Mission Basilica. What caught my attention were the walls which were filled with written mysteries of the Holy Rosary and the Stations of the Cross (instead of carved figures or photo prints normally seen in churches).

Mission San Juan Capistrano
The Mission in San Juan Capistrano is the only mission in Orange County.  It was founded by Fray Juniper Serra on November 1, 1776. Just like the rest of the colonies of Spain, Christianity was introduced to the Native Americans --- the Acjachemen (pronounced as Ah-HAWSH-eh-men) and a community was built wherein the locals adapted to the ways of living of the colonizers. 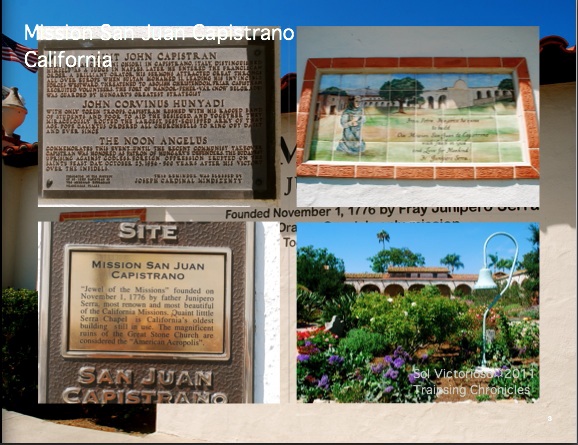 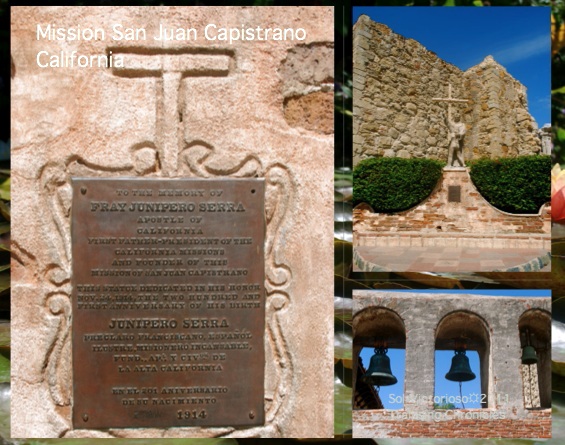 Curious how the friars went about their daily life?

A Padre's Daily Schedule as displayed on Mission San Juan Capistrano exhibit
2:00 AM Early morning prayers (Matins)
5:00 AM Wake up, pray and prepare for the morning mass
7:00 AM Conduct morning class and religious class for the Native Americans
8:30 AM Breakfast
9:00 AM Ring the bell for community work to begin. They either teach, supervise or care for the sick
12:00 PM Ring bell for lunch
12:30 PM Midday prayer followed by siesta
2:00 PM Ring bell to resume work
3:00 PM Short break to pray
5:00 PM Ring bell for community work to end
5:30 PM Conduct evening mass and lessons for Native Americans
7:00 PM Dinner followed by a siesta
7:30 PM Updating of ledgers
9:00 PM Prayers and sleep

Looking at their schedule, their day was always filled with prayers (they prayed five times, not counting the mass that they celebrate twice a day). Plus they had siesta, not just after lunch but also after dinner. I was wondering if some of the padres who took siesta after dinner eventually fell into deep sleep, thus neglecting their nightly duty of updating the ledgers. 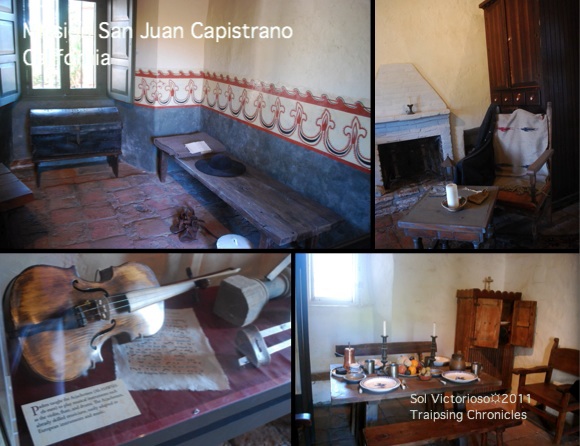 (from top left clockwise)
1. A padre's bedroom or dormitorio
2. The sitting room where they worked, entertaining traders, priests, ship captains, dignitaries and alcaldes. It was also in this room where they read, wrote letters and updated their ledgers.
3. The dining room or comedor
4. The Acjachemen who were very skilled musicians learned ho to play the European instruments

As for their meals, the padres dined in the comedor. The pozolera or the padres' kitchen was buzzing with a variety of tasks such as roasting and grinding grains, smoking and curing meat and preparing three meals daily. Back then, only the male cooks and servers worked in the kitchen and prepared the dishes for the priests and important visitors. On the other hand, the female counterparts worked in an outdoor kitchen and prepared meals for the community to be served to over a thousand people on a daily basis. Wow, talk about discrimination and a patriarchal society. Women had to sweat it out  outdoors and churn out dishes to feed a thousand mouths while the men worked in the comforts of the pozolera preparing dishes only for a number of padres. 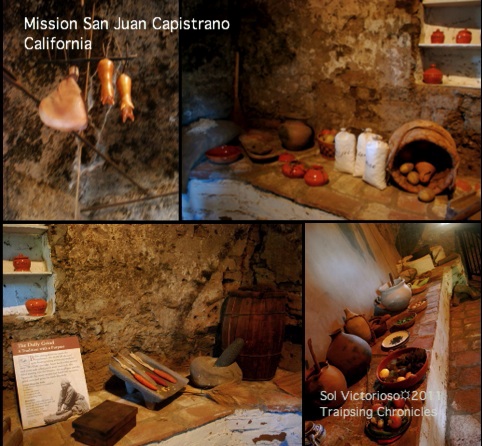 (from top left, counterclockwise)
1. The padres loved to eat smoked and cured meat and so they would hang pieces of meat in the chimney.
2. The Acjachemen used mortar and pestle in grinding acorn and seeds for their Wi-wish porridge. When they moved in to the mission, they learned how to use the flat stone metates.
3-4. Ingredients for their daily fare. Some of the dishes prepared were atole (barley or corn gruel) and pozole (meat chunks and vegetables)

However, almost a century later, the mission saw its demise with the independence of Mexico from Spain (California was a territory of Mexico), the collapse of the Great Stone Church during the earthquake of 1812 and the division and sale of the mission's landholdings to 20 prominent families in California.

Just in case you'd like to know the families who owned the twenty ranches, here is the list: 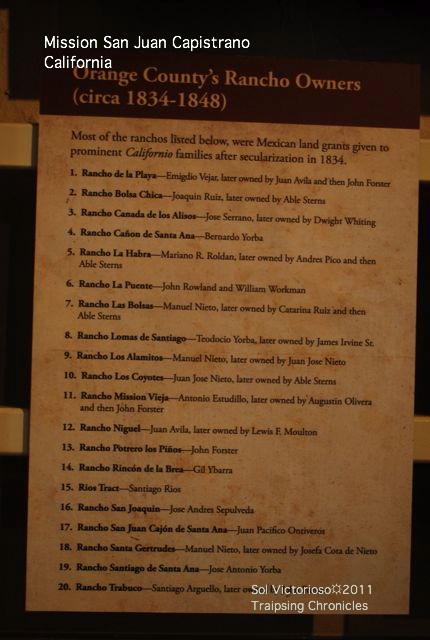 And here's the map of the landholdings: 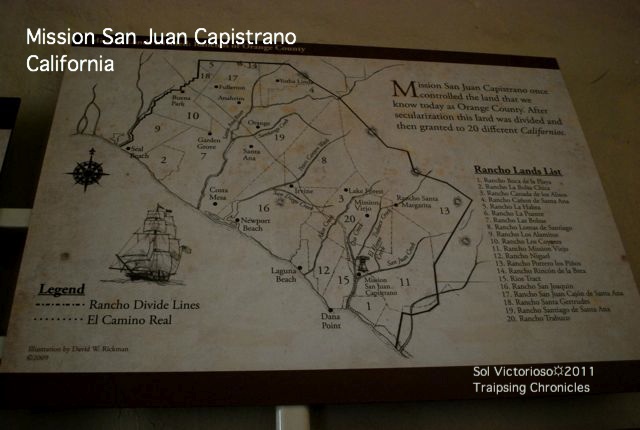 Later in 1845, the mission itself was sold by Governor Pio Pico to John Forster for $710.00. The Forster family made the Mission their home for over 20 years. When California became the 31st state to join the Union, efforts were made for the return of the landholdings to the mission. In 1853, Bishop Joseph Alemany filed a petition with the Public Land Commission for the return of the mission lands. Two years later, the US Land Commission gave a decree for the return of the said properties to the Catholic Church. Meanwhile, President Abraham Lincoln signed a Patent of Title which nullified the Forster's claims over the property and secured the ownership of the same to the Mission San Juan Capistrano. 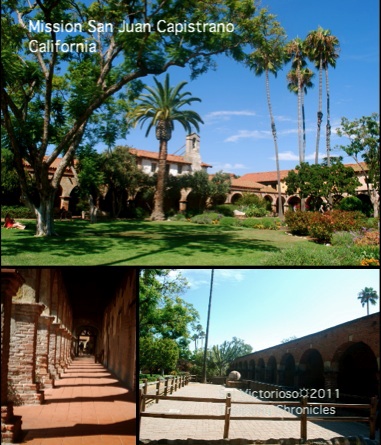 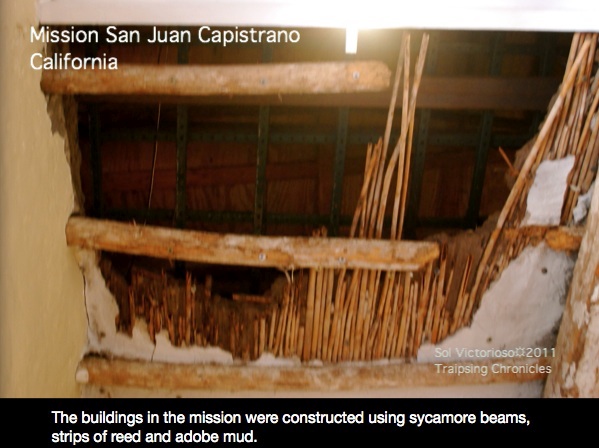 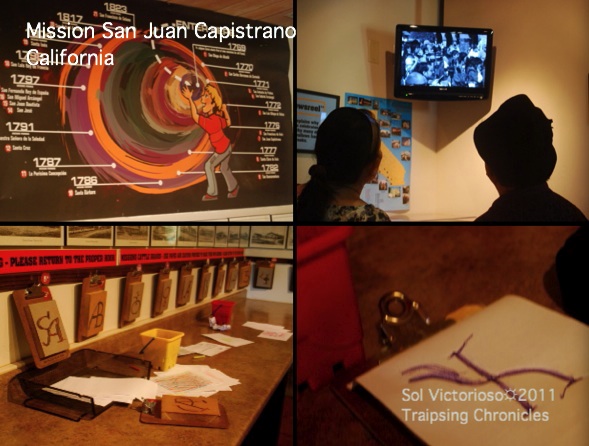 There is an interactive room in the mission where you can watch a video about the Mission's history and try your hand in designing a brand for the cattle. 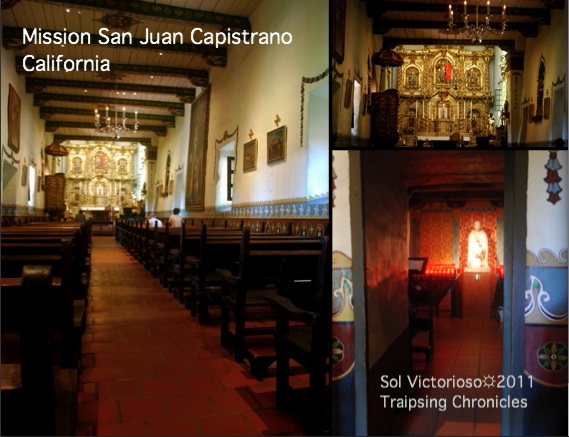 The church inside the Mission which also has a chapel of St. Peregrine near its entrance. 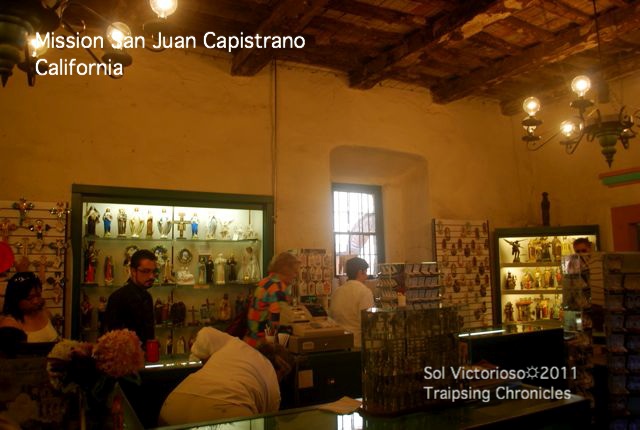 The gift shop which used to be the Forsters' sala. 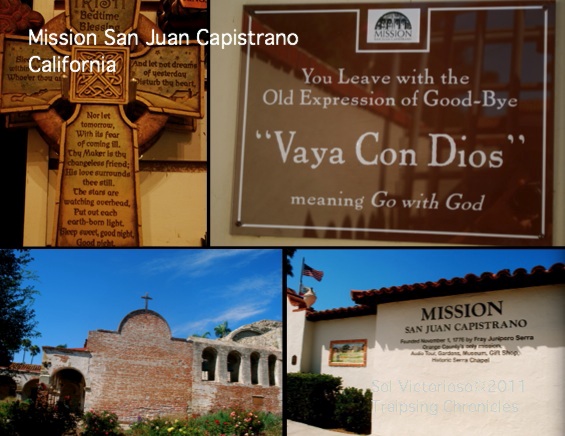 Currently, efforts are being made to preserve the land, the buildings and what is left of the Mission San Juan Capistrano.

Posted by sojournersol at 11:18 AM