All Set for the Star-Spangled Journey 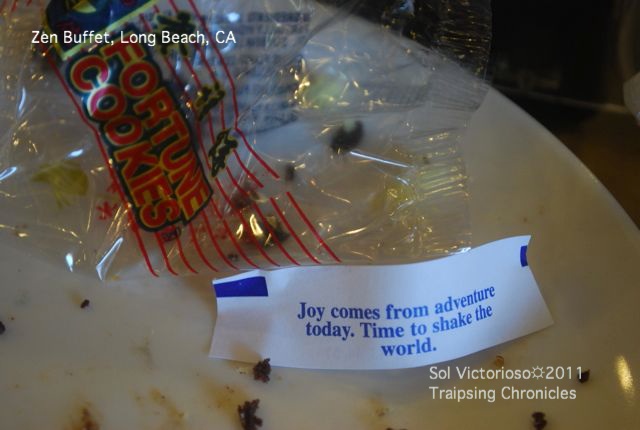 It took me about a month to prepare for the month-long vacation. Hours and hours of surfing the web, communicating with people in different time zones (which meant staying up late for so many nights which spilled over to ungodly hours, reading blogs and suggested itineraries in travel search engines and making huge dents in my pockets. Google, Trip Advisor, Expedia, Booking.Com and official tourism sites of the various states we'll be visiting became my virtual neighbors.

Finally, August came and we were set.


- Philippine Passport valid for more than six (6) months ✓
- Valid US Visa ✓
- Travel Insurance from Blue Cross ✓
- Itinerary (which included the addresses and contact numbers of the people we'll be meeting and the hotels where we'll be staying as well as the webiste, address, contact numbers, admission price and opening hours of the sites we'll be visiting) ✓
- Print-out of our airline tickets and hotel reservations/booking ✓
- Light wash-and-wear clothing ✓
- Just in case it becomes chilly clothing set (sweater, pairs of socks, mitts, bonnet, scarf) ✓
- Several pairs of footwear (slippers, ballet flats, sneakers) ✓
- Travel/Toiletry kit ✓
- Extra pair of spectacles and the mini-screwdriver for the specs ✓
- Several bags (backpack, mailbag and a huge toiletry kit which I converted into a camera bag)
- Camera, USB cable, SD card, battery, charger (for the camera, cellphones, and laptop), universal adapter which also doubles as current converter (this piece of gadget has served me well for five years now, the 100kr was worth it.), laptop, cellphones ✓
- Book (to keep me busy during the long waits anywhere) ✓
- Emergency medicines ✓
- Application for roaming service for my 2 phones ✓
- Roomy luggage (enough space for the shopping and souvenir knick-knacks) ✓

From Incheon, we flew for ten hours to LA via Korean Air. Along the way, we experienced turbulence not once, not twice, but every so often. Was it because we were flying over the Pacific Ocean? I dunno. Good thing there was an AVOD to keep me busy and not think of the shaky flight. For this leg, everything that the airline offered was great, from the meals (aside from the western concoction, they also included a Korean dish as part of their selection) and drinks served, soft and warm blanket to the updated movie and music lists on their AVOD. My complaint, aside from the turbulent ride, was the very minimalist travel kit which didn't include a sleeping eye mask. It only contained a toothbrush, tube of toothpaste and a pair of slippers.

After ten hours, we have reached Los Angeles. So this is LA. As we hovered over LAX, it impressed upon me as a big tract of land filled with huge box-like structures bathed in brown.  After getting out of the plane, we proceeded to the immigration area. There were long lines and it took us an hour before we had our turn. I learned it was because there were many of us tourists, plus interpreters had to be called for our Asian neighbors, a computer had to be rebooted and in our section, the four counters serving us were reduced to two. Interview with the immigration officer was really brief, maybe under two minutes. We proceeded to get our luggage and went past the arrival gate.

My mom's friends, Uncle Donding and Auntie Ida Baldado picked us up at the airport. Mom also got another surprise when a member of the welcoming party was a former colleague from work, Dr. Alvin Cadalin. From the airport, we proceeded to Zen Buffet in Long Beach for our lunch and hours of conversation. Then they drove us to Radisson LAX which was our temporary home in LA.

While in LA, I checked my phones. My Sun phone worked but my Globe phone didn't. (So sorry to my friends, I never got to read your messages sent to my Globe number for the duration of my trip.) Anyway, since we'd be making lots of phone calls while in the US, we decided to buy a prepaid phone. We chose the Net 10 phone which comes with LG phone and 750 minutes of airtime worth $25.00 good for 30 days. Mind you though, that every SMS sent is worth 1 minute under this plan.

Let me share with all of you the quote I got from my fortune cookie at Zen Buffet. A sign of great fun on this journey: Joy comes from adventure today. Time to shake the world.

And now, the star-spangled journey begins.

Posted by sojournersol at 6:29 AM