Rizal @ 150 in Dapitan and Dipolog


On June 19, the Filipinos celebrated Jose P. Rizal's 150th birthday.  Some trooped to his home in Calamba, Laguna while others braved the the rains in Fort Santiago.  My mom, my friend JRTU and I did our own commemmoration by tracing Rizal's steps in Dipolog and Dapitan in Zamboanga del Norte where he spent four fruitful years and made great and lasting contributions to our nation before he was executed in Bagumbayan in 1896.

June 17, 2011
From Dipolog, we took the Evergood bus to Dapitan (Php 20.00/pax) and got off near the Liwasan ng Dapitan which was our first stop of the Rizal trail. Just seeing that vast green plaza reminded me of Kasaysayan I and P.I. 100 and our discussions during those classes. From my Kas I class, I learned that most of the towns and cities in the Philippines are characterized by the plaza complex --- a very big plaza surrounded by the church, school, town hall, and other edifices of important institutions in the community.  In Dapitan, the plaza was surrounded by the St. James Church, the parochial school and the city government offices. 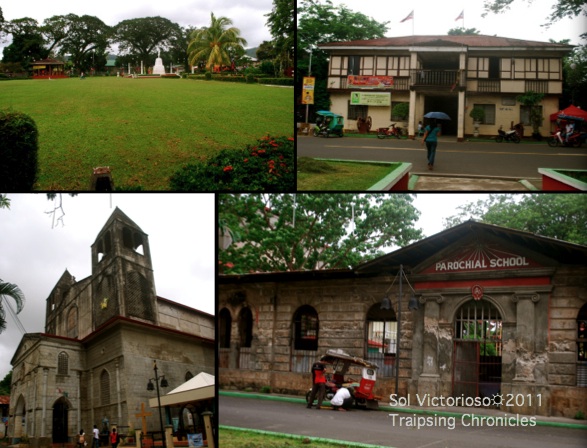 One is greeted by a marker before entering the park. It is said that the liwasan or park was designed according to Rizal's plan. He even planted some of the acacia trees which are standing tall to this very day. 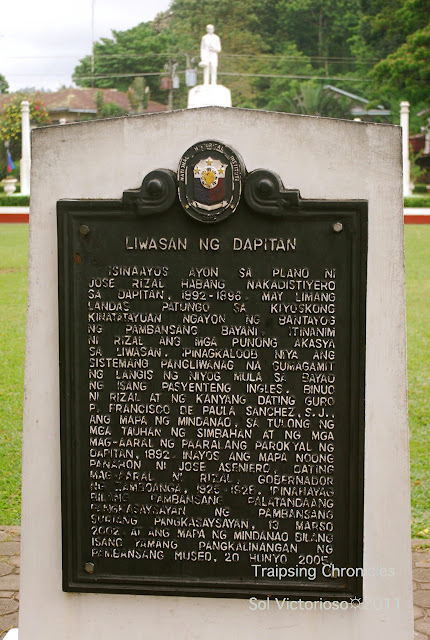 From the park, one can see the parochial school and next to it, the St. James Church where Rizal heard mass during his exile. The historical marker was placed on his favorite spot in the church.  What caught my eye inside the church was the orange-and-white twirl-like design of the ceiling. On the other side of the plaza was the city government office. 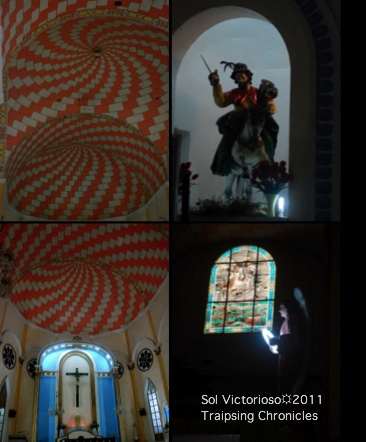 We also checked the relief map of Mindanao nearby which Rizal made with the aid of Fr. Francisco Paula de Sanchez, S.J. and based on the map of Fr. Pedro Murillo Velarde, S.J.  He used the said map in teaching history and geography to his students. 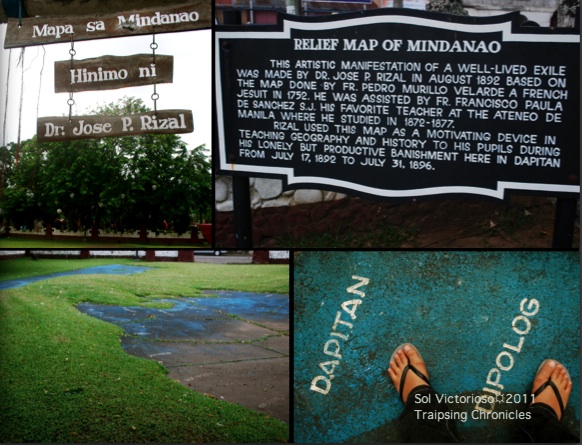 We crossed the street to the spot where the Casa Real once stood, the official residence of the politico-military governor which became Rizal's home for eight months before he was transferred to Talisay.

And of course, I had my Rizal passport so I asked the guides under the tree where I could have my passport stamped. They directed me to the Tourism Office which was located within the confines of the Aniano Adasa Ancestral House which was built in 1900. 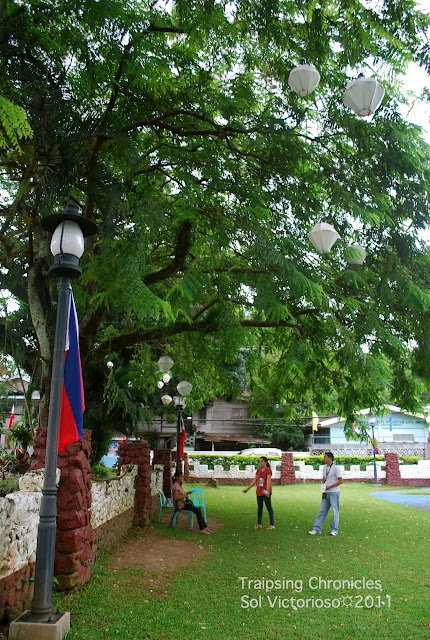 Finally, I got my 2nd, 3rd, 4th and 5th stamps in this leg. Unfortunately, I was told that the persons-in-charge for the Rizal Shrine and Punto del Disembarco were not around at that time. I was advised to make my way back to Dapitan on June 19th to have my passport stamped. 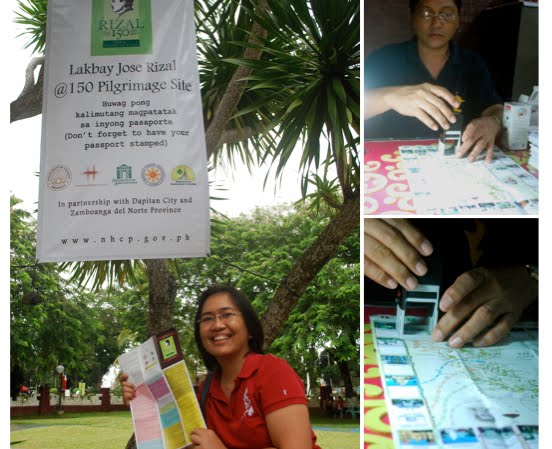 Thanks to Joey Utzurrum for this "me and my Rizal passport" shot.

But with or without the stamps, we continued our trail. We hailed a tricycle which took us to the Rizal Shrine in Talisay. This place earned Dapitan the monicker Shrine City. According to the info in the Rizal passport, this huge piece of property in Talisay was bought by Rizal using his lottery prize and earnings as farmer and merchant. He developed this place into a homey abode and conducive spot for learning. He also constructed the waterworks system. Today,  the replicas of the houses and the structures that Rizal built serve as a reminder of the contributions he has made to our nation and the peaceful and productive life he had while on exile. 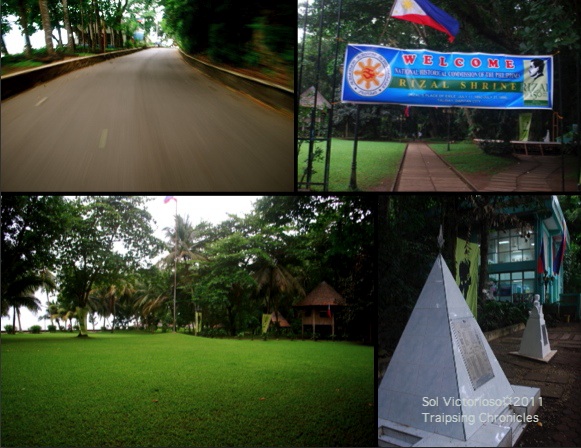 On the right side, one can see a statue of Rizal (which made me wonder if that was a life-sized statue).

And you wonder what's written on this slab? Here goes the first stanza of the poem Mi Retiro:

By the spacious strand where the sands are soft and fine,
At the foot of the mount in its mantle of green,
I have built my hut in the pleasant grove's confine,
From the forest seeking peace and a calmness divine,
Rest for the weary brain and silence to my sorrow keen.

From the entrance one can see the Casa Redonda, a replica of the octagonal hut which was used then as a clinic and dormitory of some of Rizal's students.

Going up the slope, one can see several huts. One of these is the Casa Residencia, a replica of Rizal's home where he stayed for three years. 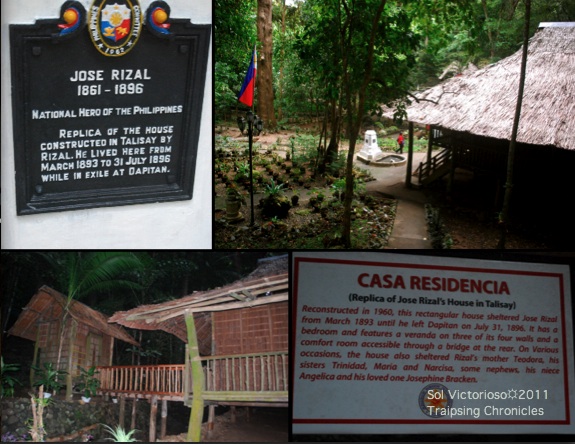 Just a few steps away is the replica kitchen. 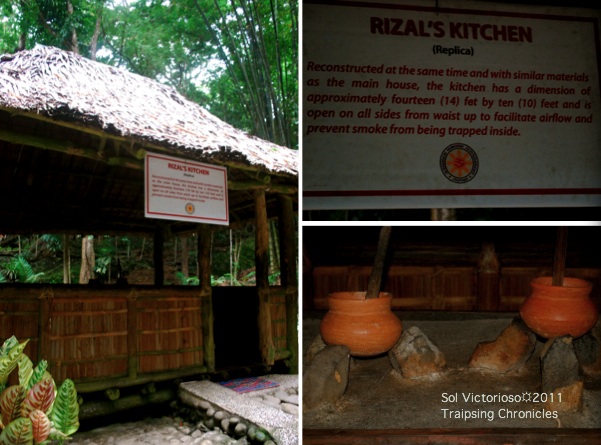 And the replica of the hexagonal poultry house, the Casa Redonda Piqueña.

The Talisay Water System which became the main water source for the farm and the household.

This rock is called Mi Retiro Rock (Rizal's Retreat Rock) since it was on this spot where he initially wrote the poem "Mi Retiro." At other times, it is called the lovers' rock since it was believed that Rizal and Josephine Bracken spent many moments here. This part of the vast estate also became my favorite because it has a vantage point of the sea which can bring about creative inspiration and at the same time,  sitting on the rock can free one's mind from the daily stresses. The cool breeze and the calm waters can definitely give the weary soul a lift.

Just near the rock, Rizal's poem "Canto del Viajero" was inscribed on concrete on a bed of green. 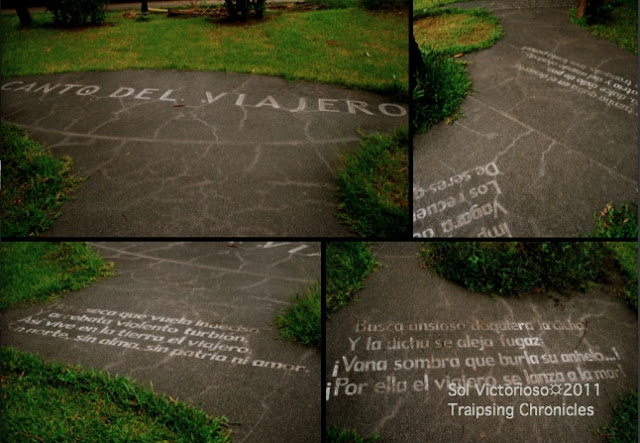 Inside the shrine, one can also find a marker which chronicled the short visit of Dr. Pio Valenzuela who was sent by the Katipunan to relay to him of their plan to revolt against Spain and to free him from his exile by means of escape. But of course, Rizal was not in favor of armed revolution nor of their plan to bring him out of Dapitan. 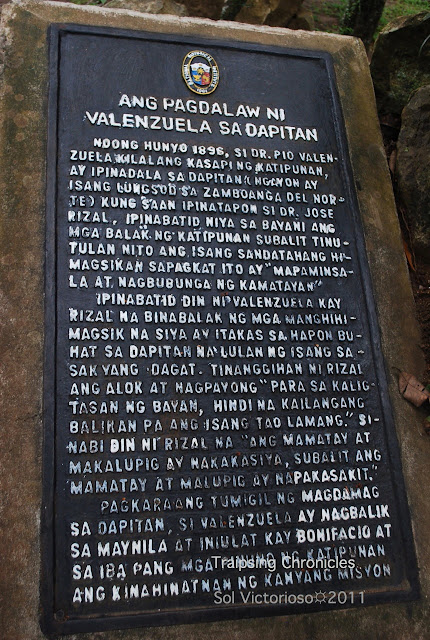 I also noticed one portion of the seawall which takes the form of the bow of a ship. It was on this shore where Rizal ended his exile by boarding the ship bound for Manila on July 31, 1896.

From the Rizal Shrine, we made a stop at the Punto del Disembarco de Rizal where, according to the historical marker, Rizal disembarked on July 17, 1882 at around 7:00 p.m. 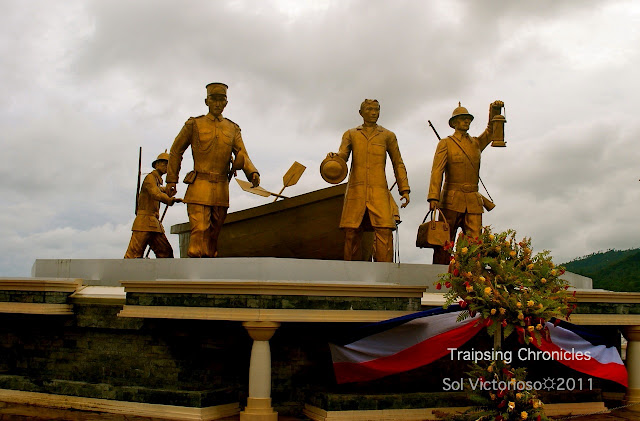 I also found this fascinating. The streets in Dapitan have that Rizal connection. Here, you'll find street signs such as Noli Me Tangere, Leonor Rivera and Josephine Bracken, to name a few. 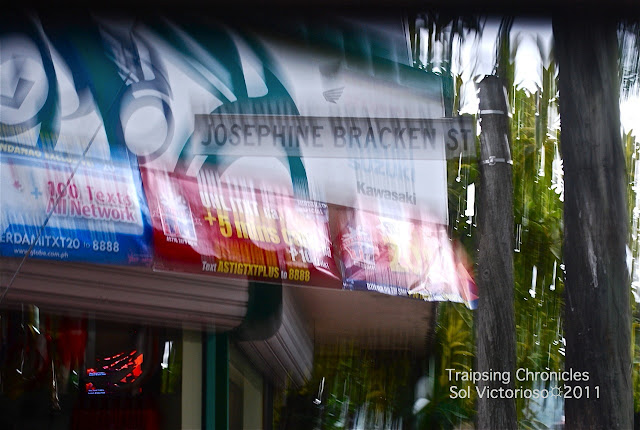 June 18, 2011
What greeted us at the Dipolog Cathedral, aside from the renovated facade of the church, was the long NO to RH Bill streamer. 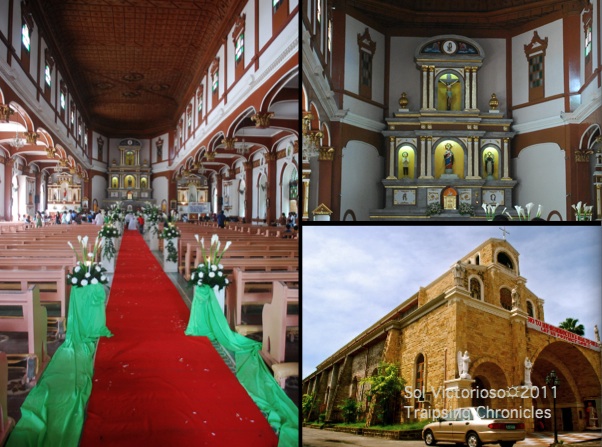 We couldn't get near the altar which is said to have been designed by Rizal because a wedding was taking place while we were there. So we were contented snapping away photos of the church.

And that was how we celebrated Rizal's 150th birthday. We were just so lucky that the event that brought us to Zamboanga del Norte fell on Rizal's weekend birthday.
Posted by sojournersol at 11:55 AM

It has been years, no decades since I last visited Dapitan. And I couldn't even find my pictures! Just the same, I bet those photos were blurry and no good. Thanks for sharing this, Sol. I don't have my Rizal Passport but I do want to go back.