Time to get to my next destination. There was no direct flight from Casablanca to Barcelona so I booked a flight with transfers in Madrid. But then another unexpected thing happened. My flight to Madrid was delayed for about two hours and I only had a lay-over of two hours. I knew that I would not make it to my flight to Barcelona but I was still hopeful.


Upon touch down, I was in a mad dash. From the hallway, I could still see the Air Europa plane bound for Barcelona. I breezed through the immigration, claimed my luggage and then went straight to the airline counter. I talked to the airline people to accommodate me on the flight. But when they saw that I had a luggage that needed to be checked in, they told me that it was already impossible because the plane was about to taxi down the runway. Thankfully, they booked me on the next flight (early morning of the next day) at no extra cost (no rebooking fees and no-show charges).

Next concern, where to stay in Madrid. I had little credit left on my cellphone. And then I tried calling Auntie Nellie’s apartment to no avail. I wasn’t sure if she was on vacation or she had classes in Madrid so I just took my chance. I was glad that when Kuya Jess and Ate Mai fetched me at the airport the last time, we took the metro to Auntie Nellie’s place. I tried to recall the train line we took, the transfers made and the station where we exited. Somehow I got everything right. It was already dark when I entered a familiar neighborhood. Soon, I was already in front of the apartment building and pressed the doorbell. I kept buzzing only to realize later that I pushed the wrong apartment button. There were no names, just numbers and I forgot the apartment number. I also felt that the neighbors in the other buildings were becoming suspicious because I was standing there for so long. Good thing someone came to open the door. In my halting Spanish, I explained my situation and I was allowed to enter the building. I went straight to the apartment and I was happy that Auntie Nellie was already there considering that she would usually come home late especially with the busy schedule that she has.

Despite encountering another road block, I was grateful that no untoward incident has happened to me. I was also happy because it gave me an opportunity to bond with Auntie Nellie.

I was already at the Barajas airport at dawn, making sure that I won’t be left behind.

For this leg, I had Novie Suñaz to thank for. She arranged for my accommodation and gave a detailed instruction on how to get around Barcelona.

Upon arriving in Barcelona, I went to the Aerobus stop to board the bus that would take me to the city center. I got off at Plaza Universitat and looked for the landmarks going to Novie’s Barcelona home. Entering Joaquin Costa street was like being transported to a Pinoy neighborhood. Kids playing down the street, Filipinos chatting in a mix of Spanish and Filipino, some kababayan minding their meat shop while the others shopped or whiled the time away.

When I got to the apartment, Novie’s relative (Laila) was waiting for me. She was worried because I didn’t arrive as scheduled. I tried to catch some sleep in the morning. After lunch, we walked down Las Ramblas and then took a glimpse of the famous Sagrada Familia. 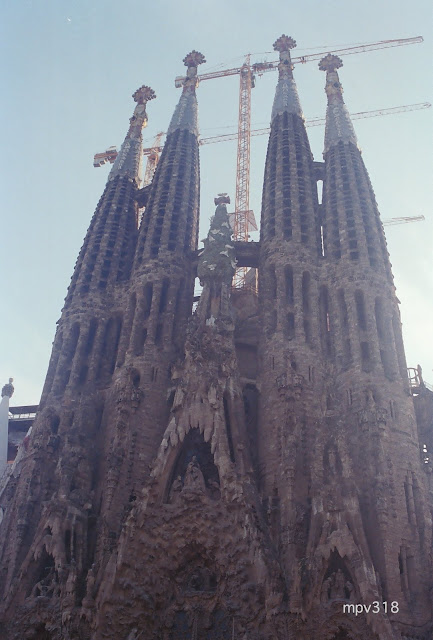 We also went to the Eurolines office to book my ticket to Toulouse. Later in the day, I met Tita Evelyn Castro (Novie’s mom). In the evening, we were invited by another relative of Novie’s to have dinner with them. We had Filipino meal while watching some soaps shown on TFC. After dinner, we had a very long walk back to the apartment.

At dawn, Tita Eve and her partner brought me to the bus terminal for my trip to Toulouse. I showed my ticket to the inspector and then I was allowed to board the Eurolines bus. It was already daylight when we entered Toulouse. However, I started worrying when the bus didn’t take the Toulouse exit. Instead, it continued cruising down the highway until it stopped at a gas station. I approached the bus driver and asked him if the bus was going to the city center. I showed him my ticket which reflected the Toulouse Station as my destination. He showed me the manifesto which didn’t have Toulouse as a stop for the said trip. We were already exchanging words, me in English and the driver in Spanish. The alternate driver Yuri approached us. In broken English and Spanish, I explained my predicament to him while he told me that their trip was based on the route plan given to them by the bus company. I tried to maintain my composure but somehow Yuri sensed my helplessness. He told me not to worry and brought me to another gas station on the opposite side and introduced me to Cristina, the manager. Yuri told her of my plight. Both Cristina and Yuri tried to ease my panic by offering something to eat and drink as well as assuring me that everything will be okay. All this time, we were talking in broken English a.k.a carabao English to us. It was the only way we could understand each other. After a while, Yuri had to leave because it was time for them to continue with their trip. On the other hand, Cristina called a cab company.

Finally, the cab arrived and I was brought to the train station. I already lost precious hours (and a considrable amount for the taxi fare) getting stranded in some highway in Toulouse that I missed the train to Lourdes. The next trip was not until noon. Since I had so much time in my hands, I went to the Eurolines counter to lodge my complaint and seek for refund for the cab fare. The guy at the counter said that Eurolines Spain and Eurolines France were two different companies and I had no right filing a complaint there. I asked him if there was any way that my concern will be addressed but he became rude. By this time we were already arguing until I found it useless. I didn’t want my day all the more ruined so I resolved to address the matter in Barcelona. I proceeded to the train station to get something to eat and waited for the train.

Thanks for the scenery en route to Lourdes, all the stresses that morning faded away. I reached Lourdes by mid-afternoon. There were no shuttle buses so I decided to walk briskly (not minding the throbbing pain in my ankle) towards the grotto, hoping against hope that I would be able to bathe inside the cave. There was a very long line when I got there and I learned that they stopped accepting people who wanted to bathe in the miraculous waters before the 4:00 p.m. cut-off time. A lot of us pleaded to get in but the people minding the line were stern, accepting only those who were really very sickly or had some physical disabilities. 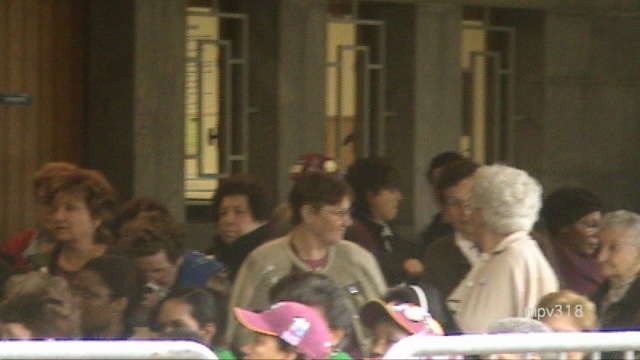 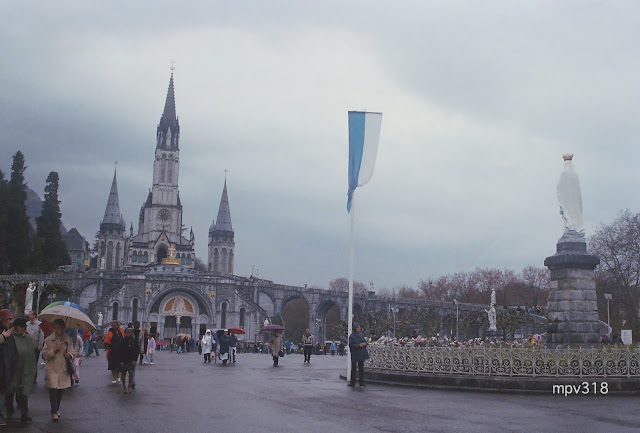 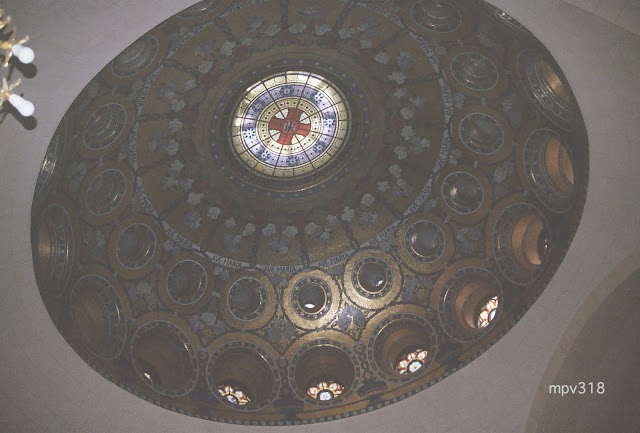 I decided to attend a mass but before I got to the church, it started raining. Again, I was drenched for the second time in this whole trip. But I also considered it a blessing because the heavy rains made up for my missed chance of bathing in the cave. After the mass, I went back to the city center but not without filling my 500 ml bottle with the miraculous water of Lourdes and they made it easier for the faithfuls by setting up several faucets. (Hmmm...someone I knew went to Lourdes and brought liters of water back to the Philippines.)

I used up my time visiting the house of St. Bernadette and getting sidetracked by the items sold in the tourist shops. They had empty bottles shaped like the Lady of Lourdes or with a stamp of the Lady. There was a stall that proudly displayed the Philippine flag.

I lost track of time so I missed the train back to Toulouse where I planned to spend the night. And since the train station closes early in the evening and the other hostels (more of like a B&B) as well, I had no choice but to get a room at the Ibis hotel. Another big dent in my pocket. But it was okay. I deserved a good night sleep after a stressful day. 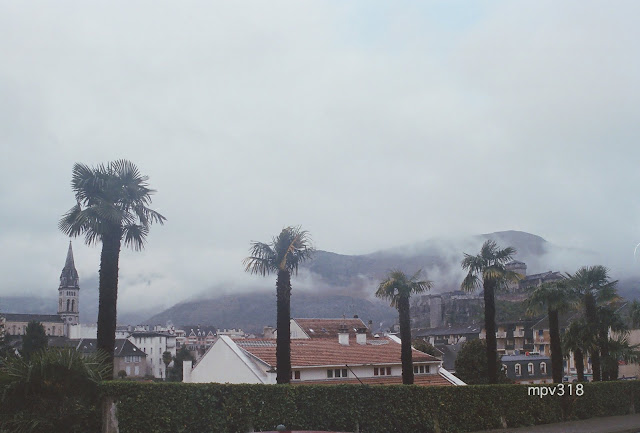 It was still raining the next day. On my way back to Toulouse, I had the chance of seeing the beautiful Pyrenees. A scene of calmness on an otherwise grey day. Once in Toulouse, I opted to rest inside the train station. There was much to explore in the city especially since it was the hub of Aerobus but it was raining cats and dogs and I didn’t want to further hurt my ankle.

Finally, it was time to board the Eurolines bus for Barcelona. It was an altogether different experience. Our bus driver was kind and courteous and he always looked after the safety and comfort of his passengers. He also took time to chat with the passengers. This time, I noticed the comforts of the bus. It had its own WC and wash room and an onboard cafeteria (although the prices of the goods were a bit steep). The seats were roomy and comfy. And yes, we were required to wear our seatbelts all throughout the trip. Seeing this made me wish for similar amenities in passenger buses going on a long distance drive in the Philippines.

After passing through the border of France and Spain (another passport check and I was grateful that I was not among those interviewed by border authorities), our bus made one stop in Girona before finally arriving in Barcelona. I went straight to the Eurolines office. It took the person at the counter office a long time to give me the complaint form. I filled it up and attached a copy of my taxi receipt for reimbursement. It was a long shot to getting a reply to my concern. And as expected, I haven’t received any reply since then.

Given my physical condition and limited time, I could no longer go on exploratory walks around Barcelona. So I took the Hop-On/Hop-Offf bus to see the city in a day. I went to Plaza de Catalunya and boarded the upper deck of the tourist bus to get a better view of the major sights of Barcelona. The good thing about the hop-on/hop-off bus was that I could choose which tourist spots I'd like to explore and which sights I'd like to enjoy from the comforts of my seat in the double decker bus. 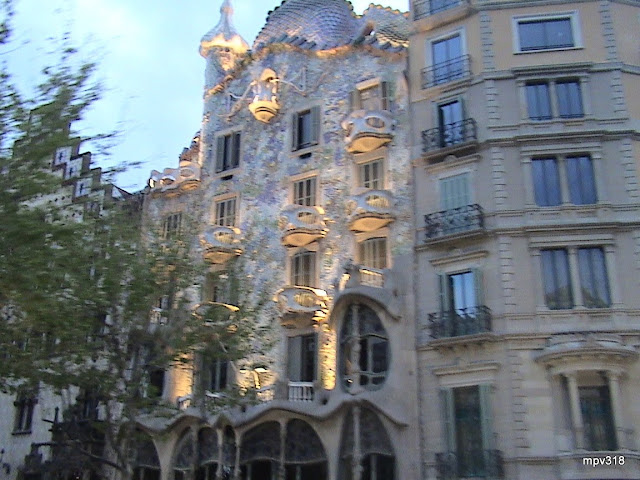 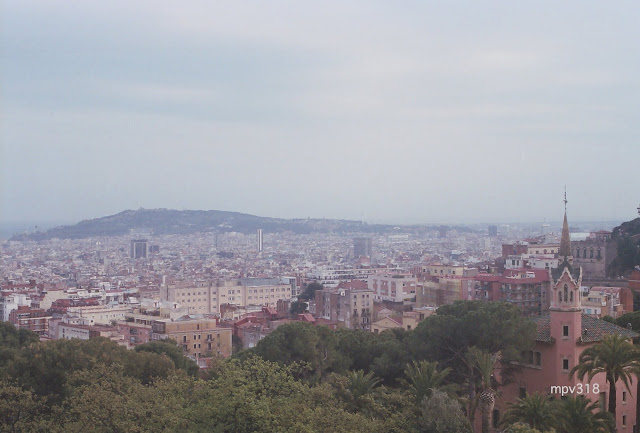 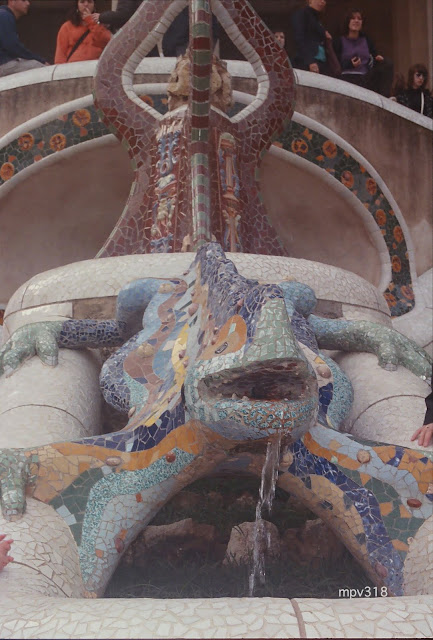 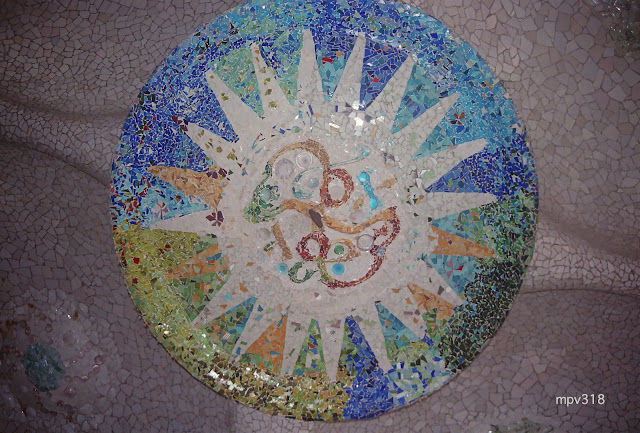 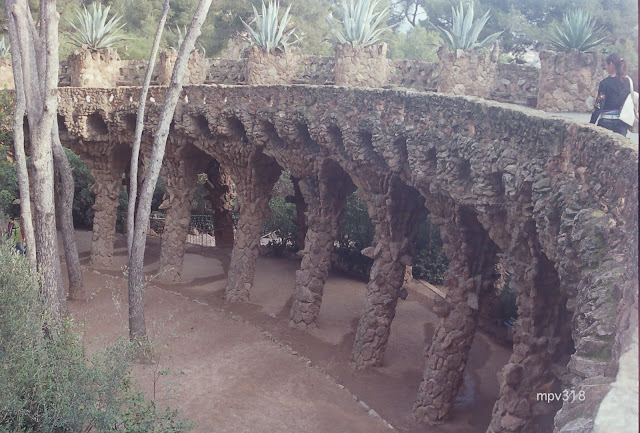 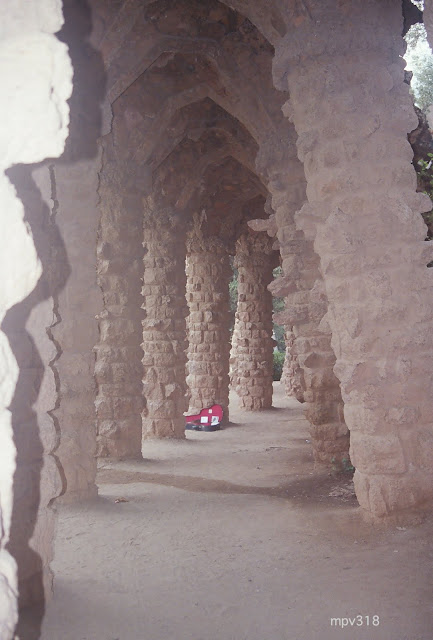 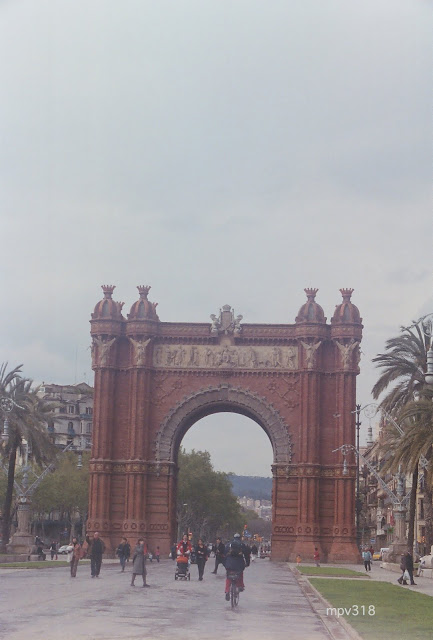 Finally, it was time for me to get back to Stockholm. I went to the El Prat airport early in the morning for my Alitalia flight back to Stockholm with a stopover in Milan. It was noon when I arrived at the Arlanda airport and Andre Suñaz fetched me at the airport. Later in the afternoon, I went to the church and saw the Kungsträdgarden enveloped in pink. The cherry blossoms were in full bloom. Spring has finally come, a perfect welcome for me in Stockholm.
Posted by sojournersol at 1:09 PM