It was my first time at Alejandro's, a resto in Cebu City's Capitol Site area, which takes pride for having the best crispy pata in town. No, I wasn't there to try the sinful pata. I joined the Artiaga siblings and their friends for some geeky yet cool fun and for which Alejandro's is now (in just 7 weeks) becoming known for --- the Trivia Night and it happens every Wednesday from 8:00-10:00 p.m. 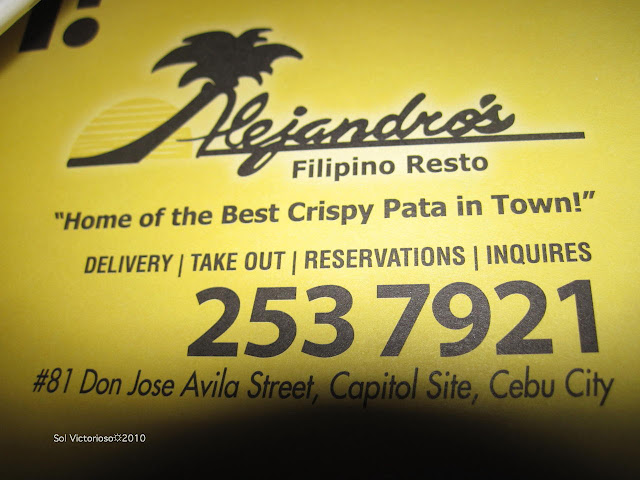 The Trivia Night started last February 10, 2010. The teams are seated in their own booths or tables and are given a white board and a marker. There is a quiz master and two tabulators who'd go around the resto to check the answers. There are four sets (with 5-minute yosi breaks in between) and each set consists of three categories with eight questions each. All in all, we had to answer 96 questions. The categories can be anything and everything under the sun. Last night, we had The Child in You (almost perfect), Philippine festivals (so proud we perfected this category), Current Events, Stephen King (nobody in the group was a Stephen King fanatic so we did poorly☹), Semana Santa, American Idol, Supermodel, Pets in the Movies, Spell It, History, Country Slogans (I didn't know that our country's shoutout is "More than your usual." I thought it was Wow Philippines!) and Girl Power. 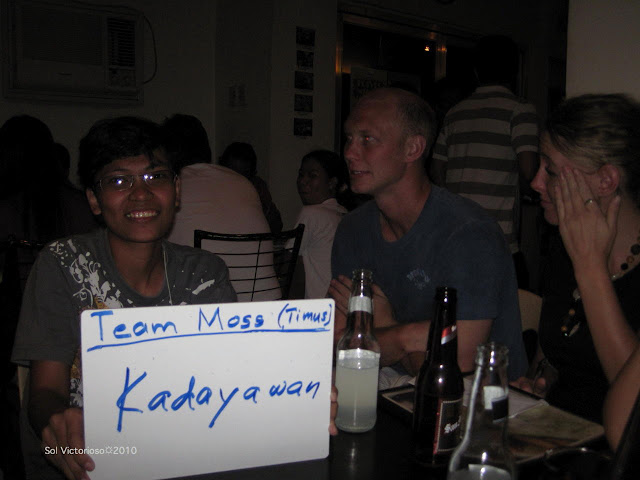 That's Pam, one of the walking googles of our Team Moss. Timus was the original name of the team which means "black ant" but the organizers heard otherwise; hence the group came the be known as the more "sosyal" Team Moss. 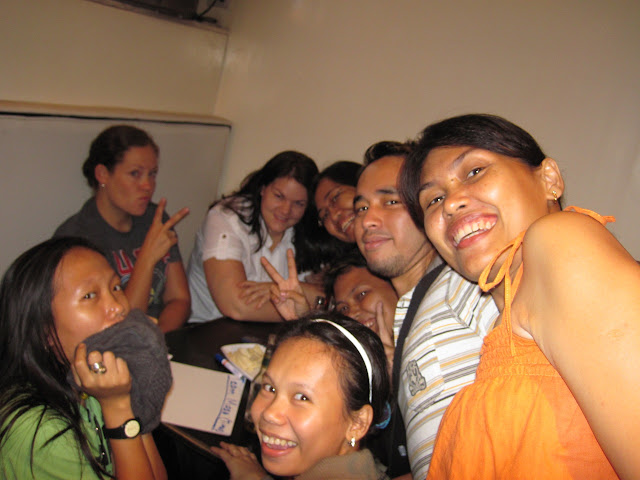 We were leading during the first set. However, after 72 more questions, a platter of kropek and a dozen bottles of beer, we slid down to the 3rd spot. Not bad. This was Team Moss' third night and for three straight weeks, the team stayed in the Top 3. But we still aim to conquer the top spot so we'll have our faces plastered over the Wall of Fame. Hahaha!

If you need to unwind after office hours on a Wednesday night, head out to Alejandro's and flaunt your encyclopedic and googlic brains. Don't forget to call the resto in advance so that a table can be reserved for your team. Make Alejandro's your Wednesday night habit. See you there.

Posted by sojournersol at 2:17 PM

I think your group was seated behind us in one Trivia Night last month.
We were on the bottom 5 in the end. Aside from the crispy pata, I hope that we could return to redeem ourselves. :)